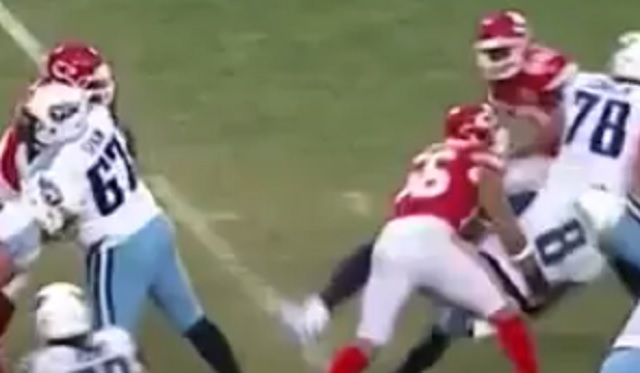 Marcus Mariota is making his postseason debut today against the Kansas City Chiefs and before the game the Titans franchise QB described his excitement about playing in the playoffs for the first time in his career.

Everyone is just really excited. …. It is a clean slate, everyone has an opportunity. There’s a chance to go win it all. I think everything kind of intensifies and guys understand every play counts.”
yes want to continue to play, we want to make some noise, and see how far we can take this thing,” Mariota said after practice said on Tuesday. “We are just going to take it one week at time. Obviously our goal is to get to the Super Bowl. We are in the mix, we have an opportunity, and we’ll do our best to make the most of it.

Unfortunately for Mariota things aren’t looking very good for him and the Titans. In the second quarter of the game, Mariota got absolutely blasted by Chiefs linebacker Derrick Johnson in the backfield with this vicious hit.

anyone else squeal after that mariota hit? looked like derrick johnson was shot out of a cannon

If you watch the slow-mo of that hit, I think you can see Mariota’s soul leave his body.

No idea how that wasn’t a fumble. Just glad Marcus Mariota is still alive.

Mariota might not be able to play in many more playoff games if he keeps getting like that. My God, Derrick Johnson is a beast.