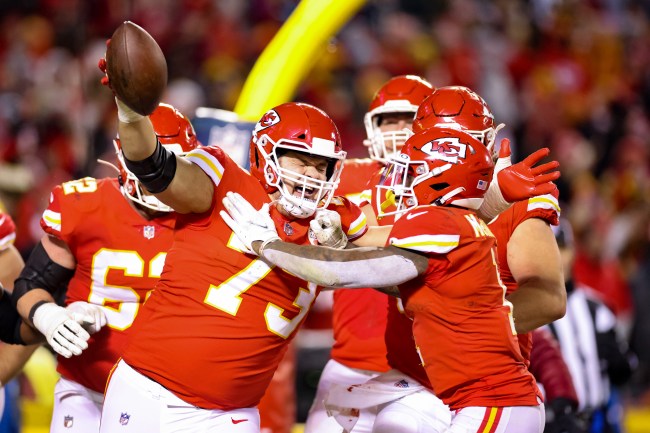 However, it gets even more awesome after Patrick Mahomes broke down the play after the game.

Early in the second half, Kansas City held a 14-point lead over Pittsburgh and was knocking on the door once again. On 3rd-and-goal from the (less than) 1-yard-line, head coach Andy Reid could have given the ball to his running back and sent him up the middle.

The Steelers stacked the box against a heavy set to the short side and Mahomes ran the play-action to crash the defense. It worked, but the secondary stuck tight with their guys.

As he looked toward the end zone, nobody was open but for one man— Allegretti, the 25-year-old lineman out of Illinois. To get open, Allegretti absolutely TOSSED the potential defensive player of the year, T.J. Watt, to the turf, turned around and looked for the ball.

When Mahomes saw him open, he took a chance and sent a spiral right into Allegretti’s chest. The big fella held on and put his team ahead by three scores.

Did you SEE Nick Allegretti THROW that defender before catching the touchdown?
OH MY GOODNESS! #BigUglies 😤💪 pic.twitter.com/qbmR15QOqY

After the game, Mahomes revealed that the play was very much not designed for Allegretti. It just so happened to play out that way.

Mahomes went through his first four reads and found nobody open to throw the ball. When he looked to his fifth option, Allegretti, and saw him without a defender in the vicinity, he pulled the trigger and made it happen.

Patrick Mahomes said that Nick Allegretti was like the fifth option on his touchdown play. The #Steelers covered everyone else but him.

Interestingly enough, Mahomes said that they had run the play in practice during the week and a similar scenario played out. The Chiefs defense covered their offense’s receivers and Allegretti was the only one open.

Patrick Mahomes reemphasized this wasn't a play designed for Allegretti. He said that they actually had the same situation happen in practice this week. Sure enough, Allegretti gets open and scores in the game too. https://t.co/GXVDrXQpXA

They say that practice makes perfect and that is literally what happened for Allegretti and the Kansas City offense. God bless the Big Uglies.