Report: Some Chiefs And Rams Players May Sit Out MNF Game Cause The Field Sucks So Much 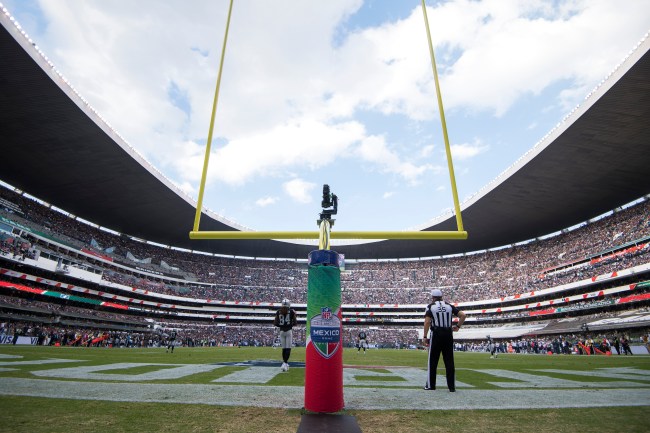 Next week’s Monday Night Football game between the Kansas City Chiefs and Los Angeles Rams is one of the most anticipated in NFL history. With both teams sitting with just one loss, you could probably imagine that the good folks over at the Worldwide Leader, ESPN, are licking their chops at airing the contest, which is set to be played in Mexico City’s Estadio Azteca.

Problem is, as we reported earlier today, the field conditions at the stadium are sh*tty AF, to say the least, as the turf resembles a dirt field than something any NFL team should be playing on. It’s so bad that the NFL is seriously considering postponing the entire game altogether, which seems like the right thing to do if it wants to protect its players from playing on such crappy field conditions.

Hey @ProFootballDoc this is the Aztec Stadium today. What are the risk for Rams/Chiefs players to play over there in a week? pic.twitter.com/r6ILWkaG6j

Discussions continue about whether Monday night’s Chiefs-Rams game will be played in Mexico City, LA or postponed, per sources. NFL determined to play it Monday night in Mexico City, but the field is “a mess” and might not be safe for players. It’s a significant concern.

But even if the NFL doesn’t postpone the Chiefs-Rams game, some players on both teams are reportedly thinking of taking matters into their own hands, as ESPN reporter Adam Schefter said a few of them are thinking of just sitting out the game because of the field.

If Monday night’s game is played in Mexico City, a number of Rams and Chiefs players are now strongly considering not playing in that game on that messy surface, per sources. “It’s not fair to risk our health,” one prominent player said today.

Although it’s unknown how many of the Chiefs and Rams players are considering sitting out, one of the players who has openly implied he might do so is the Rams’ John Johnson, as he tweeted this out today.

While an NFL spokesperson named Brian McCarthy did say that they “are working closely with the field manager at Azteca Stadium and others to ensure that we have an NFL-quality surface for our game, and we are looking forward to kicking off in Mexico City on Monday night,” it doesn’t seem like too many guys are thrilled about the current or, potentially, future state of the game — and who can blame them?

Additionally, both the Chiefs and Rams are reportedly making backup plans for the game, too, per Charles Robinson of Yahoo! Sports.

I’ve been told the #Rams and #Chiefs have both begun making backup travel preparations in the event Monday night’s Mexico City game is relocated to Los Angeles. Both teams still have significant concerns about the condition of the field following mandatory inspections.

These guys get paid millions of dollars to showcase their athleticism on a weekly basis, and they put their health at risk every time the step on the field. And, as the NFL, wouldn’t you want two of the most explosive offenses to play on a pristine field to put those skills on display for fans to see? I would think so, so, hopefully, the NFL just postpones the game and takes a small PR hit, because it could be worse if players are openly benching themselves to dumb down the product.