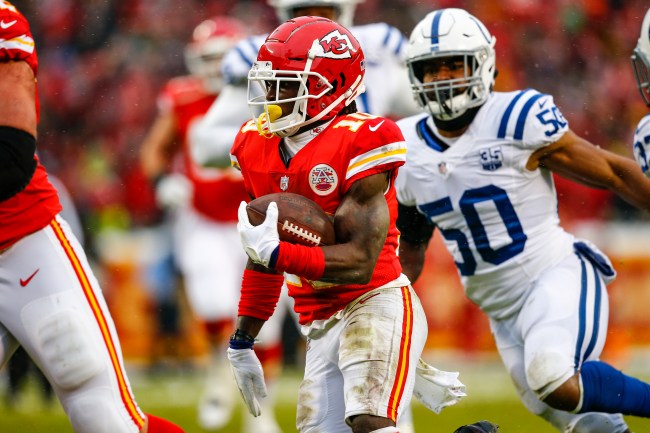 Things are not looking good for Chiefs Tyreek Hill.

According to a report by The Kansas City Star law enforcement has opened an investigation involving wide receiver Tyreek Hill and it appears to be a domestic battery incident involving his son.

Tyreek Hill under investigation for allegations of battery, per KC Star.

Chiefs: “The club is aware of the investigation. We’re in the process of gathering information and have been in contact with the league and local authorities. We’ll have no further comment at this time.”

The Kansas City Chiefs have confirmed to The Star that they are aware of a law enforcement investigation involving wide receiver Tyreek Hill.

The Star has obtained a police report from the Overland Park Police Department about a battery incident that lists a juvenile as the victim. Hill’s fiancee, Crystal Espinal, is listed under “others involved.”

The report is dated Thursday but it’s unclear when the alleged incident took place.

“The club is aware of the investigation involving Tyreek Hill,” the Chiefs said in a statement to The Star. “We’re in the process of gathering information and have been in contact with the league and local authorities. We’ll have no further comment at this time.”

According to the KC Star Hill’s three year old son ended up with a broken arm as a result of the incident.

A source familiar with the situation said Hill’s fiancee has been in contact with Overland Park police. The source said that the incident was against the couple’s 3-year-old son, resulting in a broken arm.

#Chiefs' Tyreek Hill apologized to a judge in 2015 for punching and choking his pregnant girlfriend.
Hill is now being investigated by police for alleged battery. "The source said that the incident was against the couple’s son, resulting in a broken arm."https://t.co/Qua0rESSWa

Update: According to TMZ Hill has not been listed as a suspect by police as of yet.

TMZ Sports has obtained a report from the Overland Police Dept. filed on March 5 in Kansas which lists Hill as a person “involved” in a child abuse/neglect case.

There’s another person named as an “involved” party, Crystal Espinal — the mother of Hill’s child.

Neither person is listed as a suspect on the police report.

There is a note on the report that the case was “closed/cleared” and “prosecution declined” on March 8.

Another police report filed on March 14 does NOT list Tyreek — but names Espinal as an “involved person” in a battery case involving a juvenile victim.

Again, no details and Hill is NOT listed as a suspect.

Back in 2014 Hill was in trouble with the law after he reportedly punched and choked Espinal, who was then eight weeks pregnant with their son4. He was later arrested and dismissed from the Oklahoma State football team. He received three years probation after pleading guilty to domestic assault and battery. Hill was then selcted in the fifth round of the 2016 NFL Draft by the Chiefs.