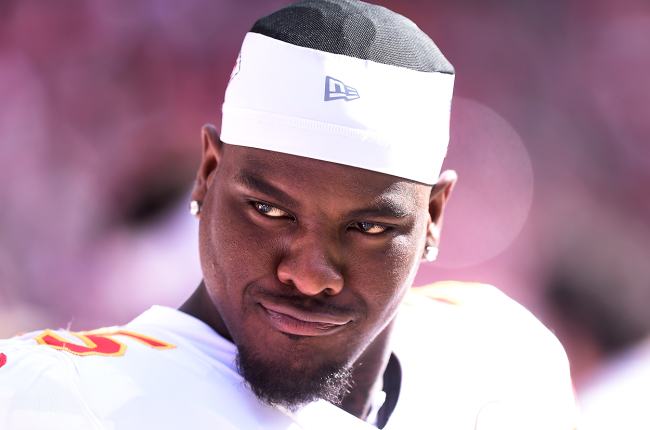 Chiefs defensive end Frank Clark is a maniac. The 29-year-old former second round pick spent the first four years of his career in Seattle before signing with Kansas City and has been extremely successful in both spots.

Over the course of his seven-year NFL career, Clark has recorded 224 tackles, 53.5 sacks, forced 13 fumbles and picked off two passes in 105 games with 73 starts. At 6-foot-3, 260 pounds, he is one of the last people that an opposing quarterback wants to see beat his tackle and come flying off of the edge.

While his on-field stats are impressive, earning him three-straight Pro Bowl bids, his reaction to the team’s recent fake bobcat prank is the perfect example of his attitude as a player and as a person. He is ice cold and ready to eat— figuratively, but also probably literally.

Earlier this week, as the Chiefs continue training camp, the team decided to place a fake bobcat in some of their players’ rooms and filmed their reactions as they walked in the door after they returned from their days off.

And then it was Clark’s turn. His reaction was not one of fear, but laughter. The fake bobcat was actually more scared of him than he was of it. The man has ice in his veins.

Travis Kelce was also not particularly phased and the video closed with cornerback Trent McDuffie getting scared, but it was Clark who stood out. He wasn’t even phased.

This was too good 😂😂 #susprise #bobcat #scareprank