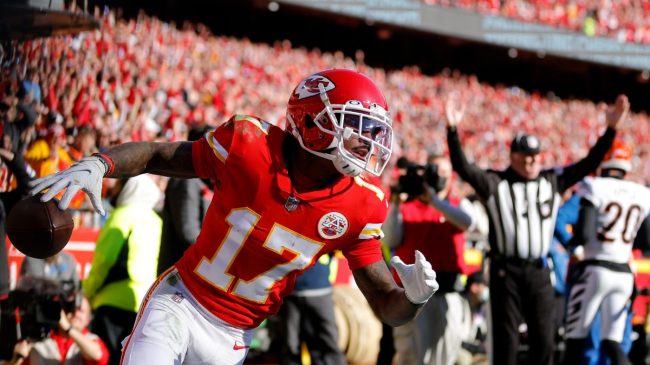 The Dolphins made a huge splash on the NFL market this week.

Miami is adding superstar pass catcher Tyreek Hill to the receiving corps, signing the speedster to a four-year extension worth $120 million. He’s an immediate upgrade for the Dolphins’ skill position players, and he’s now teaming up with Jaylen Waddle to form maybe the fastest WR duo in NFL history.

While things are looking up in the Sunshine State, many are wondering what will happen in Kansas City.

QB Patrick Mahomes loses one of his most lethal weapons in the passing attack and could see a bit of a drop off in 2022.

The loss certainly stings, but there could be a player on the roster that can fill an immediate void. And his fantasy football stock may start to rise because of it.

Fans and media are looking to Mecole Hardman to fill the role of Hill.

While he doesn’t necessarily possess the skillset that Hill does, he does bring speed and playmaking ability to the offense. Now, he’ll get an opportunity to line up alongside Juju Smith-Schuster as the offense’s clear go-to option.

The projected spike in production has folks debating where Hardman might land in this year’s fantasy football drafts.

Fantasy football players are always looking for that one surprise.

Someone who may have been quiet the year before but is primed for a breakout season. That option could be Mecole Hardman in 2022.

Hardman’s speed gives him big play potential, and now that he’ll be a No. 1 option, he should see an uptick in production.

Many are already taking note, and they’re predicting just where the pass catcher might land in upcoming drafts.

Mecole Hardman is going to be a first-round pick in fantasy football drafts.

Take #2 you will see a lot: “Hardman would’ve already produced if he was good. He’s worthless in fantasy”

Correct take: Somewhere in between, and they’ll probably draft a guy anyway.

On KC side of this Mahomes is still awesome and top 5 QB but losing Hill definitely hurts and he’s no longer in the QB1 convo for FF. Stock up for JuJu and Hardman tho I fear Hardman will be over drafted. I will release updated rankings soon. Man oh man. THIS. LEAGUE.

His numbers are decent considering the lack of opportunities https://t.co/BORebOaZgC

Mecole Hardman is going to silence any doubters in 2022. Have no doubt 💪 https://t.co/gqSPbahhqL pic.twitter.com/PuaoGjxP6f

Are you taking a chance on Hardman in your next fantasy football draft?