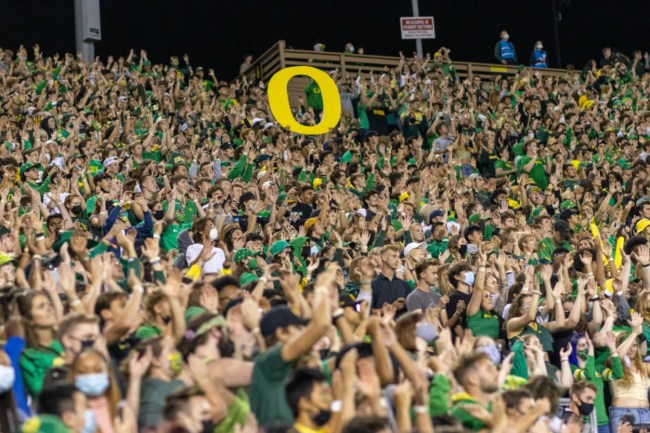 Mario Cristobal is leaving Oregon to take over as the head coach at Miami after the Hurricanes reportedly found a not-so-normal way to afford all the moves.

With Cristobal’s exit, the Ducks will now jump aboard the coaching carousel, but most fans don’t want the carousel to necessarily make its turns.

After the news broke that Cristobal is likely on his way out, Oregon fans were quick to make their case about bringing Chip Kelly back to Oregon.

While he’s still the head coach at UCLA at the time of this writing, things aren’t exactly perfect at the moment in Los Angeles. The Bruins had a fine season this year going 8-4, but Kelly’s four seasons as a whole haven’t exactly been great at UCLA.

Things could be lining up perfectly for Oregon to bring back Kelly, too, as it has been reported he has a buyout of $9 million at the moment, but that number disappears after January 15 of 2022.

Oregon fans lived a nice life when Kelly was at the helm and they want to have those same Kelly-vibes back in Eugene, it seems.

I want to see chip Kelly back @oregonfootball

Chip Kelly back to Oregon…. Speak it into existence.

Kelly ultimately decided to leave Oregon to test the waters in the NFL in 2013. He went 26-21 as the head coach of the Philadelphia Eagles and put together an abysmal 2-14 campaign in his lone season in charge of the San Francisco 49ers in 2016.