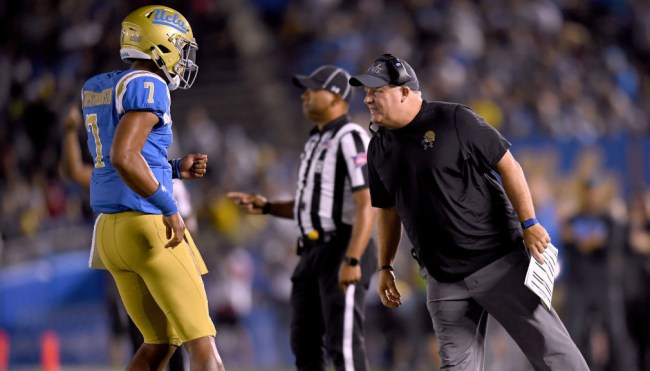 The other day when we reported on UCLA quarterback Dorian Thompson-Robinson’s dad absolutely destroying his son’s coach Chip Kelly on Twitter, I questioned why coaches left successful programs like Kelly did with Oregon. Especially considering the lack of success he has had in his coaching stops since.

With UCLA off to an 0-3 start under Kelly’s direction this year, it’s been more of the same struggle for Kelly in his third stop since leaving the Ducks.

And to make matters worse, now his quarterback’s dad is ripping him on Twitter, saying, among other things, “His years at Oregon was [sic] simply a fluke.” (Read all of his tweets here.)

However, as bad as that sounds, it doesn’t seem to have fazed Kelly much, at least on the surface.

Because on Tuesday, when he was inevitably asked about the comments from Thompson-Robinson’s dad by the media, he gave pretty much the perfect answer.

“I have no response. I mean, everybody’s entitled to their opinion; that’s what’s the great thing about sports,” said Kelly, according Ben Bolch of the Los Angeles Times. “When you win, people say good things and when you don’t win, people don’t say good things. That’s life, you know?”

“We all have to play better here,” Kelly continued. “On the offensive side of the ball, we didn’t do a very good job on Saturday, so we have to call better plays, we have to execute better and we’re all in this together.”

He’s right on all counts. When you win, people love you. When you don’t, they don’t. And with losing to Fresno State at home 38-14 and with Dorian Thompson-Robinson going just 10 for 24 passing, they all do have to do better.

Kelly also added, with regard to whether his dad’s comments put DTR in a tough spot, “That’s a question you should ask Dorian. I don’t speak for other people. I love Dorian; Dorian’s awesome to coach. If he makes a mistake, it’s a one-time mistake. I’ve said that about 100 times about him so far.”