Chris Davis Is 0-For-17 This Season, Is Making $23 Million This Year And, Oh Yeah, Twitter Has Crushed Him About It 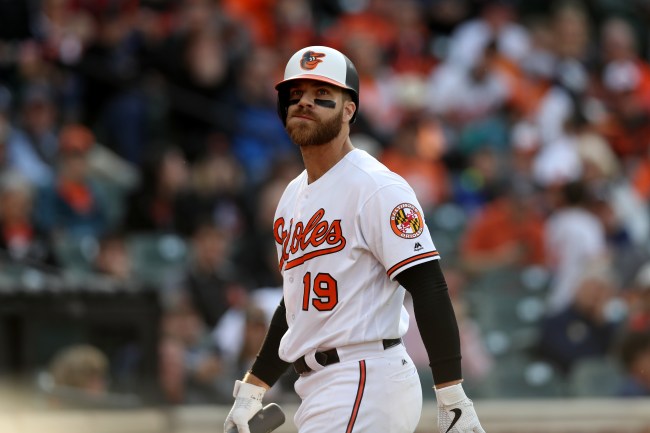 Chris Davis of the Baltimore Orioles once smacked 53 homers in a season, made an All-Star Game and finished in the top-3 of AL Most Valuable Player voting. It sure seems like a long time since he was that player, though. Ask any Orioles fan about Davis now, and they’ll probably roll their eyes before blurting out profanities, because, in the past four seasons, the “slugger” has struck out an average of 204 times per year while his batting average has been a disgusting .219. To be blunt: that’s pathetic.

As pathetic as Chris Davis’ stats have been the past few years, here’s something no Orioles fan wants to hear: the first baseman is 0-for-17 so far this season, striking out 11 times in seven games. Oh, yeah, and he’s earning $23 million, meaning he’s making nearly $142,000 per game when divided over the 162-game MLB season. Given the fact the club locked him up with a seven-year, $161 million contract back in 2016, it’s safe to say Chris Davis has been the worst investment in sports history.

With his struggles continuing today during the O’s Opening Day, the hometown fans weren’t exactly kind to the guy, booing him and tweeting a few things that show just how pissed they are that he’s been a total bust since signing that monstrous contract. Here’s some of what people were saying on Twitter.

That’s bad. I’ll give you that.

His contract is probably up soon, so i- oh. Okay, 3 more years.

Sooo..who predicted Chris Davis would be WORSE than last year. I honestly didn't think that was possible. #Orioles

Chris Davis should be in prison for stealing all that money from the Orioles. The dude would whiff when swinging at a bowling ball.

My face when I realize Chris Davis is 0 for his last 35. #Orioles pic.twitter.com/vhY5WgeR0s

Baltimore is going to kill Chris Davis before June. I would feel bad for the guy but he’s getting paid crazy money and he doesn’t want to change his approach at the plate. The #Orioles are literally held hostage, it’s crazy.

Chris Davis strikes out for the third time today and the boos continue in Baltimore. Really tough scene. #Orioles pic.twitter.com/hDE5l79E0I

In one sense, you have to feel bad for Chris Davis. After all, he is a human being, and sports are so mental that, at this point, there’s not much he can do to get his confidence back. In another sense, does he really care at all? The dude is making $23 million this year — and a lot of his contract with the Orioles was deferred — so he’s going to be making bank, basically, for the rest of his life. Still, it’s legit tough to see a guy fall so fast.

Apparently, Chris Davis understands all the hate coming his way — even if he’s not expecting it. When asked about being booed today, he had this to say, per ESPN:

“It’s not something I was really expecting,” said Davis, who struck out in all three of his at-bats before getting lifted for a pinch-hitter in the bottom of the eighth inning. “It was tough. At the same time, I heard it a lot last year, and rightfully so. I’ve said it before, I’ll say it again: I understand the frustration. Nobody’s more frustrated than I am. Especially a day like today.”

It’s almost as if Davis knows he’s washed up and just going through the motions at this point, but doesn’t want to walk away because, well, $23 million this year and next… and then a few years after that. Hopefully this guy can turn things around and start smacking homers again to offset those strikeouts, but considering he hasn’t had a hit since last September, that might be too much to ask for.