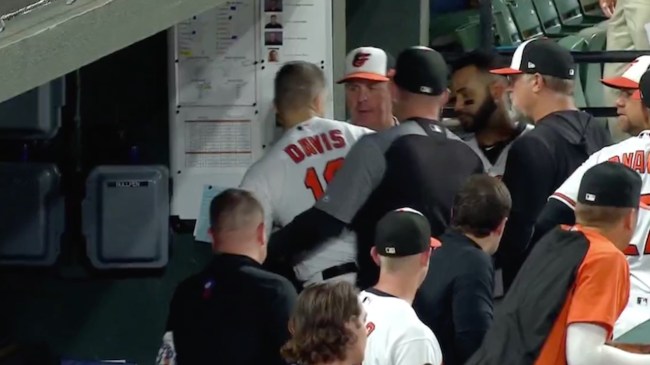 The Baltimore Orioles, as they’ve been so often throughout their disappointing history, are an utter dumpster fire.

A year after losing 115 games (!!!) en route to Major League Baseball’s worst record, the Orioles are back on their bullshit this season, as they currently sit dead last in the AL East with a dismal 38-76 record.

And now, to add insult to injury, the player who is most emblematic of their recent mind-blowing failure — Chris Davis (who is currently batting .182, mind you) — is attempting to attack the club’s manager during the middle of a game. Not necessarily the best look, in my humble semi-professional opinion.

Chris Davis has to be held back from going after Orioles' manager Brandon Hyde #mlb pic.twitter.com/Kn6wEfNcZb

Just for some perspective on how truly awful the 33-year-old Chris Davis has become in recent years, here are some tidbits about his career over the course of the last couple of seasons:

– In 2018, he set the MLB record for the lowest batting average ever for a qualified player when he batted .168.

-In 2019, he set the MLB record for the most consecutive at bats by a position player without a hit, going 0-for-54.

As for Orioles manager Brandon Hyde, is he actually the league’s worst manager? Well, I’m not really qualified to say (considering my interest in baseball is directly correlated to how the New York Mets are playing).

But what I do know is that, at 38-76, he currently manages the MLB’s second-worst team, who are only marginally better than the Detroit Tigers, who currently sit at 33-78.

At this time, while it’s unclear exactly why Davis blew up, manager Brandon Hyde — who was “embarrassed” by the situation — said during his post-game press conference: “We had words and I took him out of the game.”

Our guess? Hyde likely told Davis what everyone else is thinking: you fucking suuuucckkkkkk bro.

Not that you can really tell anything from these, but a couple screenshots from the kerfuffle in the Orioles dugout involving Chris Davis. pic.twitter.com/Q3yYA0H2JY