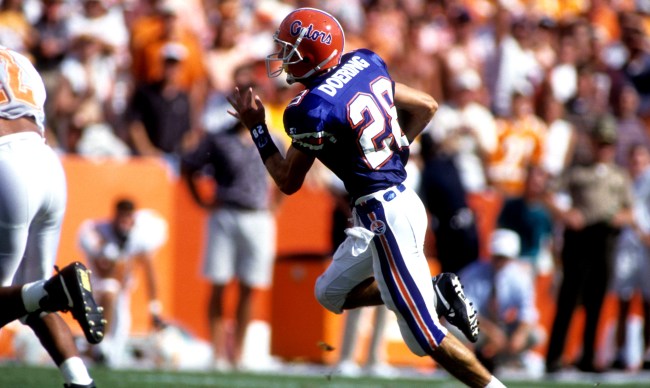 I think we’ve almost all been there. Made a bet that we later regretted for one reason or another. On Monday, ESPN and the SEC Network college football analyst Chris Doering officially became a card-carrying member of that elite club.

For you see, and may even recall, Doering played a little wide receiver for the Florida Gators after walking on to Steve Spurrier’s squad in 1991. He even is a part of Florida Gator football folklore after being on the receiving end of “The Catch” in in 1993. Why is this information important? Because Doering, being a loyal Gator, bet SEC Network studio anchor Peter Burns that his undefeated Gators would beat the also undefeated LSU Tigers this past weekend.

As a result, to honor his bet, Doering, who was a part of three straight SEC Championships during his time at Florida, earning second team All-American honors in 1995, was forced to wear a rather unusual outfit today on the SEC Network.

.@ChrisDoering made a bet with @PeterBurnsESPN on the Florida-LSU game …

Thaaaat is an excellent look for a member of the University of Florida Athletic Hall of Fame if I do say so myself.