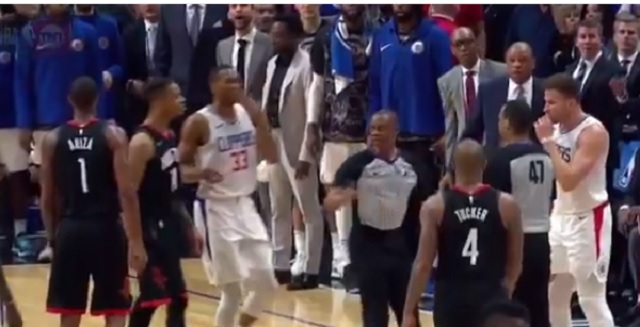 In the offseason it was reported that Chris Paul left the Clippers because he really hated Austin Rivers.

Paul’s relationship with Doc Rivers started to deteriorate rapidly after the Clippers acquired Austin Rivers. Several members of the team felt Austin acted entitled because his dad was both the coach and the President of Basketball Operations. In the view of the tenured players, Austin Rivers never tried to fit in, and when players tried to address the situation with him, he still did not respond the way the core of the team wanted him to. It led to resentment within the locker room, which often played out during games. One of Paul’s biggest contentions with Doc was that Paul, and other players, felt Doc treated Austin more favorably than other players. He would yell at guys for certain things during games and practices, but not get on Austin in the same manner for similar transgressions.

In Chris Paul’s return to LA tonight, Austin Rivers got into it with Trevor Ariza and several Rockets players on the sideline.

After the game, Chris Paul reportedly organized a crew to sneak through a secret passageway to confront Austin Rivers in the Clippers locker room.

Sources: As the four Rockets marched through the back hallway into the Clippers locker room, center Clint Capela knocked on the front door of Clippers entrance. Someone opened door, saw him standing there — and shut it on him.

Of course the Internet had jokes about the Rockets insane plan to beat up Austin Rivers.

Congratulations to Chris Paul on actually leading a team somewhere

Chris Paul and the Rockets sneaking up on the Clippers through the backdoor. pic.twitter.com/l9uHJIoDzP

Chris Paul was in the Rockets locker room like ayyy bruh check this, we can go up through the ceiling and through the air conditioning units and drop through the duct pipes and bust these MF’s in their locker room pic.twitter.com/f4ew6udkuA

Chris Paul to the other Rockets: "You are required to maneuver straight down this trench and skim the surface to this point." pic.twitter.com/0m7VYK8ZGL

Chris Paul was like “Aye y’all this the back way” 😂😂😂😂😂 pic.twitter.com/uFMM48mASE

Clint Capela was sent for a diversion while the others tried to break in the back door. The NBA is the best. https://t.co/ev7E38eyyk

when Austin Rivers heard Ariza voice at the backdoor pic.twitter.com/XoIKWeUc3H