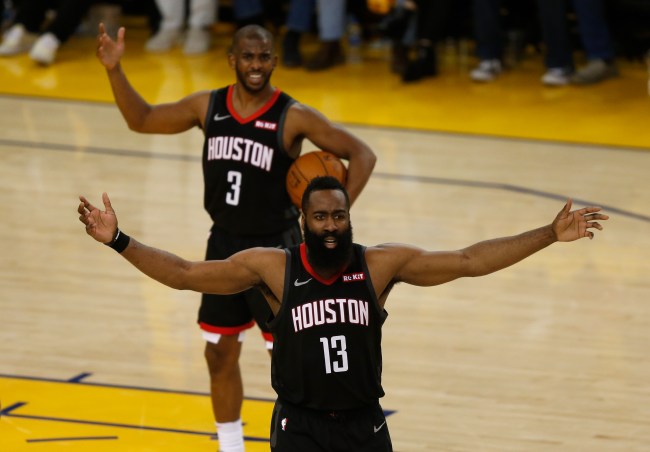 Despite the fact that the Golden State Warriors dynasty appears to be weakened due to injuries the Houston Rockets are on the verge of implosion.

Earlier this week, ESPN’s Tim McMahon reported that teammates Chris Paul and James Harden personalities were clashing on and off the court.

Chris wants to coach James,” says a source familiar with the stars’ dynamic. “James looks at him like, ‘You can’t even beat your man. Just shut up and watch me.’”

According to sources, Paul was also frustrated by what he perceived as Harden’s tendency to ignore unglamorous details that impact winning — such as moving when he gives up the ball to help spacing — and wasn’t shy about expressing those concerns.

t has reached a point, team sources say, where Paul cherishes the chance to play without Harden on the floor. On several occasions, according to team sources, Paul barked at D’Antoni to keep Harden on the bench while he was running the second unit. Harden simultaneously would lobby — or demand — to check back into the game.

Vincent Goodwill of Yahoo Sports is now reporting that the relationship between the two players is “unsalvageable” and that Paul has demanded a trade from the team.

“There’s no respect at all, on either side,” a source told Yahoo Sports. “They need to get away from one another. Chris doesn’t respect James’ standing in the league, and James doesn’t respect the work Chris has put in to this point.”

“It can’t be fixed,” another league source told Yahoo Sports about the Harden-Paul partnership.

The situation is indeed bad, a source said, and the players are frustrated with the system and surprised that D’Antoni trusts Harden so much that he allows such leeway on the court.

A thoroughly exasperated Daryl Morey said Chris Paul and his reps have never asked to trade him and he will be on Rockets next season. Said he and Harden do not have issues with one another and that he has spoken to both often this off-season about free agency evaluations, plans.

Morey gave an example: Said he had Harden and Paul on face time with him as they discussed 50 free agents together. Said he has spoken to both players quite a few times since the season with no indications either has changed their stance. https://t.co/bnBJH6zt0J

Just spoke to Daryl Morey. He reiterated there has been no trade demand from Chris Paul. "Tweet that I said that. Print it. Tweet it twice." https://t.co/oo6ge0Wkop

Chris Paul's reply to the @VinceGoodwill report: "Damn! That's news to me…" pic.twitter.com/ndX7zxIDOe