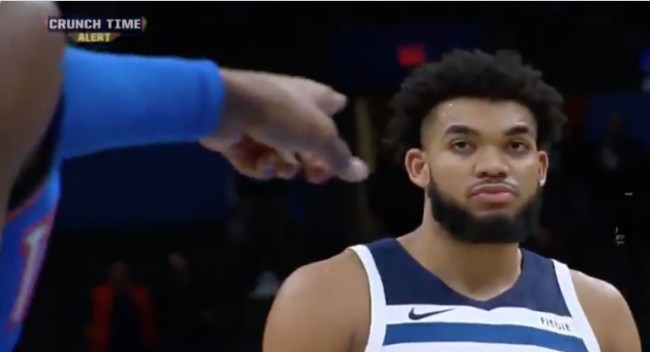 Earlier today it was revealed that James Harden couldn’t stand Chris Paul when the two played together in Houston and who can blame him?

During tonight’s Wolves-Thunder game, the Wolves were up two points and preparing to end the game with free throws when Chris Paul pointed out to Scott Foster that Jordan Bell’s jersey was untucked and demanded a delay of game call.

Chris Paul getting the officials to call a foul on a dead ball because Jordan Bell hadn't tucked in his jersey is max level CP3 pic.twitter.com/gZe3BrR7Yr

OKC received a technical free throw because of CP3’s snitching and the Thunder were able to send the game to overtime after Karl-Anthony Towns made a free thro and Steven Adams converted a wild full-court pass to Dennis Schroder who scored the game-tying bucket.

STEVEN ADAMS TO DENNIS SCHRODER. WHAT A PLAY. pic.twitter.com/SQrbR2cfBw

The Thunder went on to win the game but the Internet blasted CP3 for being a snitch.

Cp3 been a snitch and kinda dirty for awhile https://t.co/O0hYWfdFcs

Chris Paul when the slightest infraction of NBA rules hasn’t been brought to the attention of the referees pic.twitter.com/nle9c03OIZ

Yes it’s a rule and yes you’re trying to win. A snitch is a snitch 🤷‍♂️ https://t.co/tuDIgEh6si