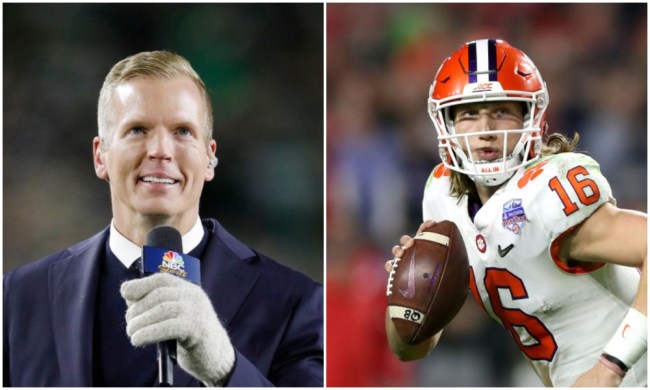 We’ve known that Trevor Lawrence is going to be drafted first overall in the 2021 NFL Draft for years now. Literally, Lawrence has been pegged as the consensus first overall pick since his high school days, but now that it’s becoming a reality, some in the media have voiced their reservations about the former Clemson QB.

Joe Theismann isn’t the only former NFL quarterback that has BYU’s Zach Wilson ahead of Lawrence on their draft board, Chris Simms also likes Wilson over Lawrence. Simms expanded on his take on ‘Good Morning Football’ suggesting that Jacksonville may be drafting Lawrence for reasons other than actually winning football games.

Simms seems to believe that the Jaguars have circled Lawrence’s name because he grew up not too far away in Georgia, went to school in South Carolina at Clemson, and is also a “God-like figure,” which you could interpret as Simms thinking Lawrence is a good looking dude.

“He is from Georgia. That is right up the road from Jacksonville,” Simms said. “He of course went to South Carolina, Clemson there. He is a God-like figure, as far as football is concerned. He is going to sell tickets. He is going to be everything they want.”

Chris Simms, a big geography guy, who knew? Clemson’s campus is a six-hour drive from Jacksonville, for what it’s worth.

My biggest takeaway here is Simms trying to spin that Lawrence selling tickets and being “everything they want” as some sort of bad thing. Nobody goes to Jaguars games and the franchise is in a bad spot at the moment. Drafting Lawrence, whose floor is extremely high and ceiling is becoming the face of the entire league, sounds like a pretty strong business move from both an off-the-field and on-the-field viewpoint.