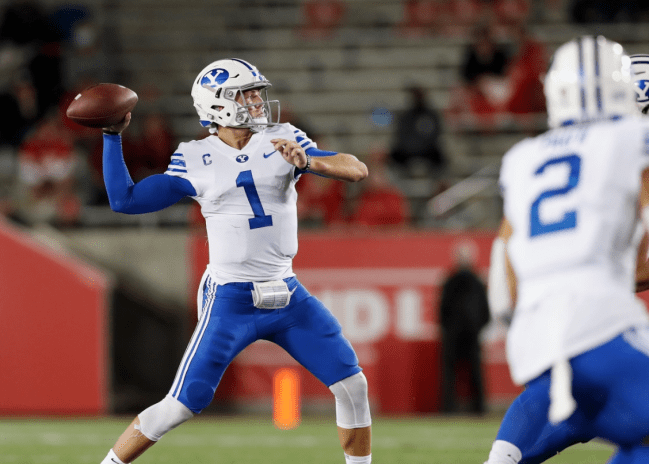 Clemson’s Trevor Lawrence has practically been atop everyone’s 2021 NFL Draft board since his debut for the Tigers during the 2018 season. He’s looked like a prototypical NFL quarterback since high school, he’s shown he has all the tools, he’s got the arm as well as the legs, and is a proven winner with a national championship and just two losses during his 40-game college career.

Literally, the only ‘knock’ you could have against Lawrence is that he never won a Heisman Trophy.

While Lawrence is the odds on favorite to go first overall to the Jaguars, at least one person out there doesn’t have Lawrence as the No. 1 QB in the ’21 Draft class. Joe Theismann actually has BYU’s Zach Wilson ranked ahead of Lawrence and would draft him ahead of the Clemson product.

“Honestly, yes. [It’s] really close. We are sort of splitting hairs here a little bit but I would [take Wilson over Lawrence] as a matter of fact,” the Washington legend told CBS Sports.

“I just think coming into this particular draft, Zach checks all of the boxes for me. Personally, my choice. My guy.”

“I think Zach, obviously, I just love the way he throws the football. It is hard to teach. We have seen people learn to perfect it a little bit. He has all the skills; he has a live arm, he has a strong arm, he can put touch on it, he can gun it.”

The 21-year-old Wilson enters the NFL Draft having completed 67.6 percent of his passes having appeared in 30 games for the Cougars. The true junior started all 12 games for BYU in 2020 completing 73.5 percent of his passes for just shy of 3,700 yards and 33 touchdowns. He’s also extremely athletic and not afraid to show off his quick feet as he rushed for 10 touchdowns in 2020 as well.