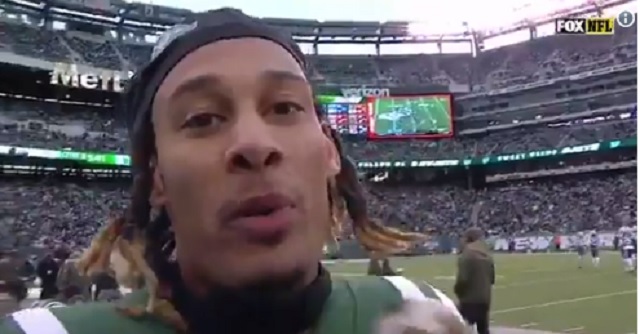 Jets wide receiver Robby Anderson is having himself a game. So far Anderson has five catches for 118 yards and two touchdowns against the Panthers and the game has not ended yet.

During a break in the game, Anderson playfully talked to the Fox camera on the sideline and campaigned for some Pro Bowl votes.

“Hey ,you all vote for me in the Pro Bowl man, please.”

“How about we worry outscoring somebody in the fourth quarter and focus on this game instead of campaigning for Pro Bowl votes, let’s try that first”

Not sure why Spielman is pissed off it doesn’t seem like Anderson was doing anything that kept his team from focusing on the game. On the contrary, it seems like Anderson’s play on the field has given the Jets offense they spark that they need against the Panthers.

Spielman needs to sit back and chill out before he has a heart attack for no reason.