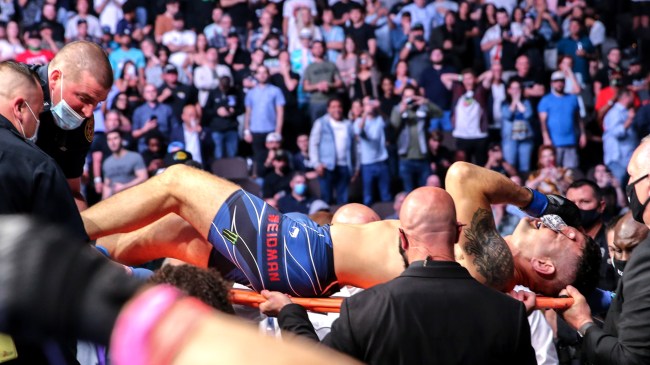 Weidman reminded us of them all on Saturday night when, just 17 seconds into his fight with Uriah Hall at UFC 261, he attempted a leg kick and SNAPPPPP! his leg bent in a way that legs are most certainly not supposed to bend.

Ironically, it was Weidman who checked Anderson Silva’s leg kick that snapped his leg in two back at UFC 168.

The former middleweight champion underwent surgery at a local hospital on Sunday after being stretchered out of the octagon Saturday night.

The surgery reportedly involved the placing of a titanium rod through his tibia to stablized that fractures. His fibula, which was also broken in half, did not need a titanium rod, said Weidman as it “matched back up to where it was broken.”

Despite the devastating injury, Weidman appears to be in good spirits.

“It’s pretty brutal, but I’m gonna get through it… Trying to find the blessing in disguise, the silver lining of this.”@chrisweidman provided an update from the hospital on his leg injury suffered at #UFC261 and a possible recovery timeline. pic.twitter.com/WpPuGKpOSN

Writing on Instagram, Weidman said, “The PT team got me to walk with a walker today. Not fun. Also, my bladder numbers were high, and I couldn’t go to the bathroom, so they told me I would have to get a catheter. I don’t want that, so I told them to give me an hour, and if I couldn’t do it by then, they could do Catheter. Thank God I was able to get it done. After deep concentration for an hour, I could pee that out, so I didn’t have to get the catheter. The reason why it was so hard is that I’m doing it lying down, and I have Anesthesia and pain killers in me.”

On top of all that, there are some fans claiming Weidman somehow deserved to have his leg broken, claiming he celebrated when Anderson Silva broke his leg in an almost identical situation during their fight – something Weidman and those who know better firmly, and correctly, denied.

For some reason this pic has largely been scrubbed from the internet. THIS is what happened once Weidman realized what had actually happened. He expressed great concern for Silva. That's among the reasons why Silva, in turn, expressed well wishes for Weidman this last weekend. pic.twitter.com/ewihD04K8j 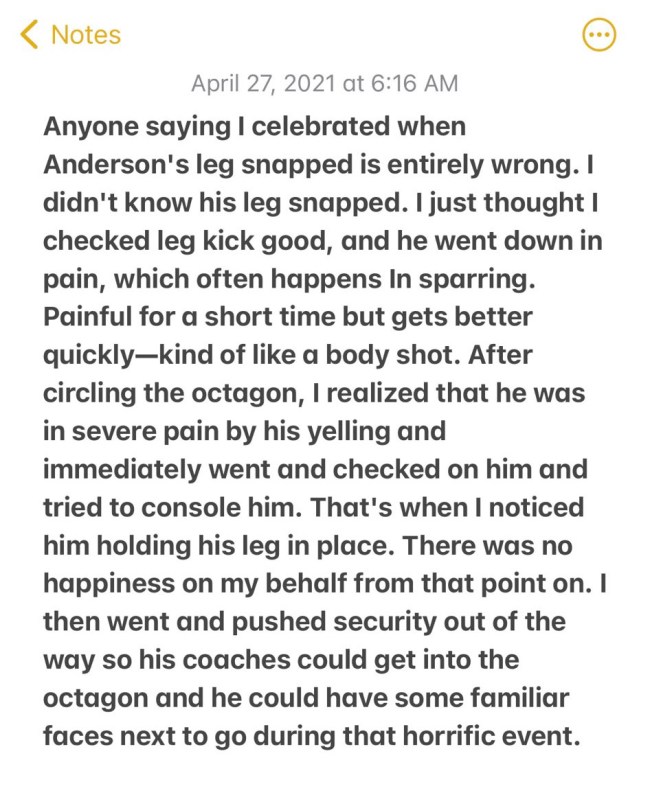 MMA Fighting reports Weidman is expected to be able to return to training anywhere from 6 to 12 months from now if all continues to go well in his recovery.