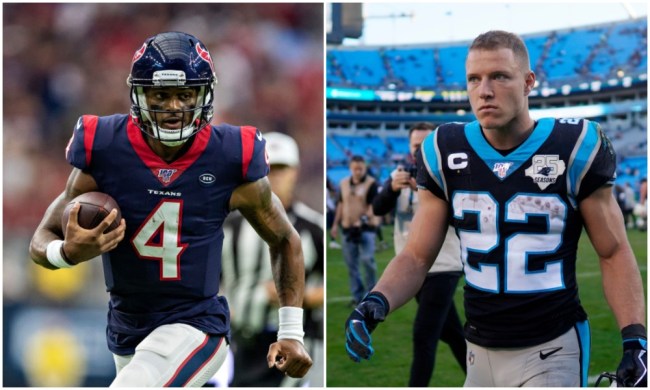 It’s no secret that Deshaun Watson wants out of Houston. It’s also not a secret that if the opportunity presents itself, the Panthers are looking to improve at the quarterback position. While Watson ‘makes sense’ for almost every team in the league given his ability under center, Carolina has to be considered as a legitimate potential landing spot for the QB.

The two questions surrounding Watson’s situation in Houston are whether or not the Texans will actually trade him – they’ve reportedly said they’re not going to – and if they do deal him, what type of return would they be looking for?

ESPN NFL Nation team reporter David Newton sees a scenario where the Panthers could offer up to three first-round picks as well as running back Christin McCaffrey, according to 247 Sports.

“The Panthers will do whatever it takes to get Deshaun Watson, and that includes giving up three first-round draft picks and (running back) Christian McCaffrey,” Newton said on NFL Live. “Owner David Tepper wants to win a Super Bowl. He’s made that clear. He understand it takes a marquee quarterback to do that. If you look at recent history, outside of (Kansas City Chiefs quarterback) Patrick Mahomes, the quickest way to do that is to trade for a marquee quarterback and not draft one in the first round. Just ask Tampa Bay.”

Watson is one of the top quarterbacks in the NFL and at just 25-years-old has many, many great seasons ahead of him. Trading him away would be a gigantic gamble for Houston, but given his desire to leave the franchise, if the Panthers were to offer three first-round picks and McCaffrey, it seems like a no-brainer for Houston. Carolina currently holds one first-round pick in each of the next three NFL Drafts.

The Texans are clearly headed for a rebuild, even if they hang on to Watson. Landing three first-round picks and one of the most explosive players in the entire league on top of that would be a tremendous haul.