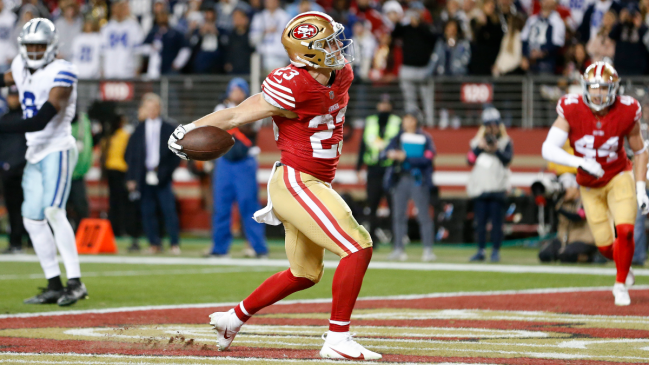 Christian McCaffrey has been an absolute superstar for the San Francisco 49ers since joining via trade earlier this season.

The Niners have lost just once since the trade and McCaffrey is averaging 110 yards from scrimmage in that time. He’s also found the end zone 11 times in 12 games.

But McCaffrey wasn’t at his best in San Francisco’s 19-12 victory over the Dallas Cowboys in Sunday’s NFC Divisional round matchup.

The former Stanford star carried the ball 10 times for just 35 yards a touchdown. He also had six receptions, but for only 22 yards.

We learned during the contest that McCaffrey was playing through a calf injury and he was routinely shown with a warmer on his lower his lower leg.

But San Francisco’s superstar, do-it-all running back isn’t concerned. After the game he assured reporters and fans that he’ll be good to go for the NFC Championship Game next weekend.

It’s obviously unlikely that McCaffrey would give away too much even if he was hampered. But his comments made after the game should reassure some worried Niners fans.

“The prep starts now,” he said of the NFC title game. “Getting your body back and ready to go, that’s the most important thing on Sunday. It feels good to win this one, obviously, we’ve got more life, but the prep for next week starts now.” – via CBS Sports

Backup Elijah Mitchell received the majority of the carries down the stretch. Mitchell finished the contest with 14 carries for 51 yards and has shown to be a reliable option for coach Kyle Shanahan. But Shanahan will hope to have his star back ready, willing and able to put in a big performance if the Niners want to reach the Super Bowl.