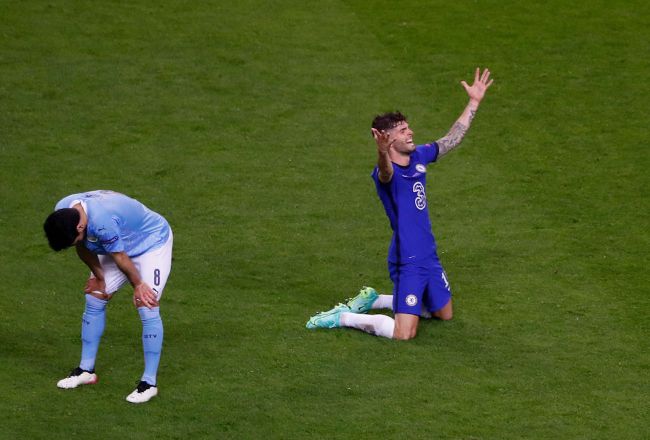 Pulisic, who came on as a second-half substitute in the 66th, was on the pitch as Chelsea secured their second ever Champions League title after defeating a relatively toothless Manchester City — who managed just one shot on target during the 97-minute match — by a score of 1-0.

CHRISTIAN PULISIC WITH A CHANCE TO DOUBLE CHELSEA'S LEAD 😱 pic.twitter.com/9RbDepUqXS

Pulisic’s Chelsea, who were underdogs heading into the match (+345 on the moneyline), bested Pep Guardiola’s Manchester City — who were competing in their first-ever Champions League final — thanks to a 42nd-minute strike from Kai Havertz, who cooly rounded Brazilian keeper Ederson following a lovely through ball from English midfielder Mason Mount.

Questions will certainly be asked of Guardiola, who, once again, seemed to overthink his tactics in a big game, opting not to start either Rodri or Fernandinho in the center of City’s midfield. Both natural defensive midfielders, at least one of either Rodri or Fernandinho had started in 59 of Manchester City’s 60 games this season before tonight. The only goal City conceded tonight was due to a through ball down the center of the pitch, an area usually occupied by a central defensive midfielder such as the 24-year-old Rodri or the 36-year-old Fernandinho.

WHAT A TIME TO GET YOUR FIRST #UCL GOAL 🌟 pic.twitter.com/ghI2BzGP9V

Despite winning the Premier League for the third time in four seasons, this season will likely be viewed as another failure for Manchester City, who’ve yet to win a Champions League title despite the mindblowing resources invested into the project — since appointing Guardiola as manager in February 2016, Man City has spent over $1 billion on player transfers all in an effort to win the Champions League.

As for Chelsea, their in-season turnaround has been borderline remarkable. When previous manager Frank Lampard was fired in late January, Chelsea sat ninth in the Premier League table. Almost as soon as German manager Thomas Tuchel was hired — who guided Paris Saint-Germain to last season’s Champions League final before being sacked by the club last winter — the team’s form turned around, eventually finishing fourth in the Premier League, while beating Porto, Atletico Madrid, Real Madrid, and Manchester City en route to their Champions League final victory.