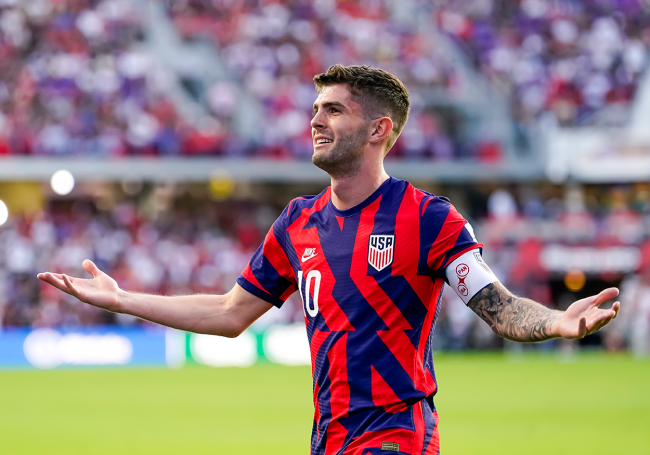 The United States Men’s National Soccer Team is one win, draw, or loss by five or less away from qualifying for the 2022 FIFA World Cup. To get to this point, the American side put on a show against Panama on Sunday.

The U.S. scored five goals in front of a home crowd in Orlando and Christian Pulisic had three of the five. His hat trick came with the help of two Penalty Kicks, but he capped the team’s scoring with a free-standing goal in the 65th minute.

Just before halftime, the Wonderboy scored his second of the night and ran over to the corner to celebrate.

another CP10 PK highlight for your feed pic.twitter.com/DVMEf8GwAB

Although the camera did not show Pulisic’s celebration in the live game broadcast, a replay showed that he got down and hit ‘The Worm.’ It wasn’t particularly well-executed, but he did his best and was having a lot of fun.

As it would turn out, there is an incredible backstory to Pulisic’s best attempt at ‘The Worm’ that makes the celebration even that much greater. On the day prior to the match, the American star met with a young boy named Mason, who requested the specific goal celebration if Pulisic was to score.

“I met someone really special yesterday. His name was Mason, and his one request was that if I scored, he wanted to see a worm celebration. That’s what that was for.” – Christian Pulisic

Mason Ogle is a high school student with a remarkable story.

Here is how his story is told on the U.S. Soccer website:

U.S. Soccer will recognize Omaha, Neb.-area high school student and cancer patient Mason Ogle as its One Nation Game Ambassador at Sunday’s match. Ogle is a massive soccer fan and despite extensive chemotherapy and a prosthetic knee, has managed to stay on the pitch with his high school soccer team.

Ogle was diagnosed with osteosarcoma, a type of bone cancer, at age 13 and treatment required limb salvage surgery plus eight months of chemotherapy. Further scans detected tumors in his lungs, requiring surgery to remove the diseased tissue and more chemotherapy. Tumors were detected again last summer, but Ogle has still enjoyed a very active senior year at Underwood High School in western Iowa. He remains a frequent participant at Eagles soccer practice for small-sided scrimmages and shootarounds and is considering playing goalkeeper this spring to see more time on the field. In addition, he manages the cross country team, lifts weights and helps run lighting for the drama club.

Ogle got the chance to meet the team on Saturday. During his time with Pulisic, he requested ‘The Worm.’

When Pulisic scored on Sunday, although it wasn’t the most incredible form, he got down and adhered to Ogle’s request. What a special moment!