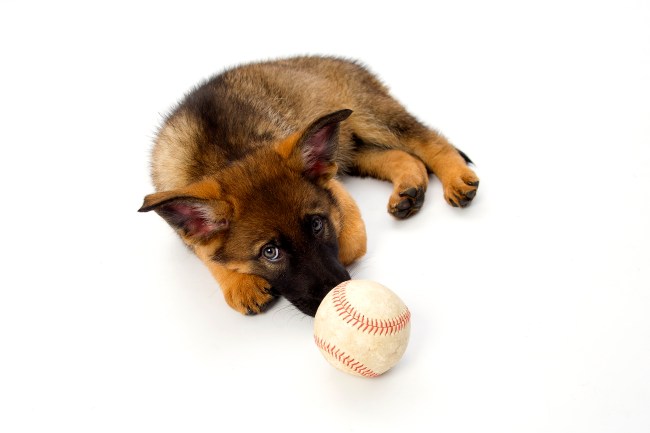 It’s still very early in the 2019 season but Yelich is already off to a red-hot start. He’s hit home runs in all five games against the St. Louis Cardinals so far this season and he tied a Brewers franchise record for most home runs in a game when he dropped three bombs against the Cards.

Yelich also tied the Brewers’ franchise record for most RBIs in a game with 7, a feat that’s been accomplished 12 times throughout the years. All of this would be incredible on its own but there’s more. Christian Yelich won a little girl a puppy by hitting a home run.

The little girl and her sister were sitting in the stands holding a sign proclaiming that their dad would buy them a puppy if Yelich hit a home run and he did exactly that. Here’s a picture from March 30th, a game where Yelich hit his third home run of the season.

Congrats! What are you going to name him? Might we suggest Yeli?

Brewers 1, Cardinals 0 in the first. pic.twitter.com/i6VBiUF8ie

Flash forward to yesterday and Yelich hand-delivered the puppy to the family AND he hit three home runs in one game.

UPDATE: They are going to name him Yeli. 🐶 pic.twitter.com/J95rP1Rh5m

BUY THOSE LITTLE GIRLS ANOTHER DOG!

That's 3 for the MVP! pic.twitter.com/ZJpKTbu2Tb

Christian Yelich is only the second Brewer with 7 HR against the Cardinals in a season. He’s only played five games against them this season.

He just needs 4 more home runs against STL in his remaining 14 games to set the record for most homers against the Cards in a season.

If I’m the Milwaukee Brewers I’m immediately going on eBay to buy one of those counterfeit ‘service dog’ vests and slapping it on that puppy so that little girl can bring it to every game this season because that dog is clearly a good luck charm. They also need to give her season tickets if that hasn’t happened yet because they’ve managed to capture lightning in a bottle here and need to keep it going.

The Milwaukee Brewers are 11-6 on the season and 5-5 in their last 10 games which is good enough to lead the NL Central by 1.5 games over the Pirates and Cardinals. The Cubs have started slow and are 4 games back with a 6-9 record (nice) so far this season.

Yelich is third in the league right now with 8 home runs behind Bellinger on the Dodgers and Khris Davis on the Athletics. Yelich is also third in RBIs with 22 on the season, and he’s hitting .354 so far this year with three stolen bases. he’s definitely a fun player to watch right now.