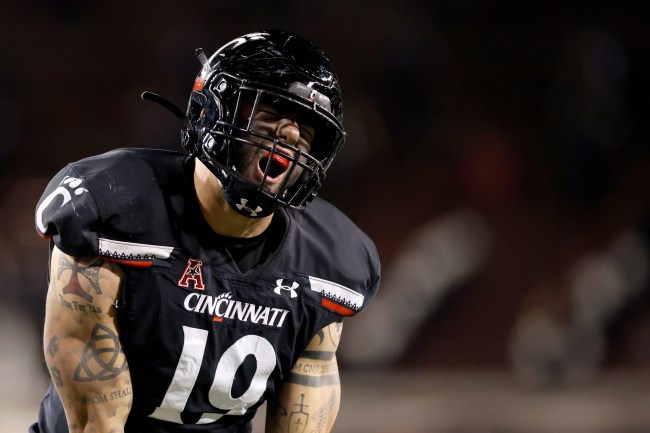 If there was ever a year for an unconventional College Football Playoff, 2020 would be it. The Pac-12 is playing a six-game schedule, the Big 12 has only one team (Oklahoma State) with a single loss, and the SEC continues to beat up on itself. An undefeated Notre Dame would surely make things a little bit more by the chalk, but there is a lot of football left and a few Group of Five teams are making their cases for the fourth playoff spot. One of those teams is Cincinnati, which sits at 7-0 after a definitive win over East Carolina on Friday. The No. 7 ranked Bearcats handed it to the Pirates in a 55-17 victory and need to make every point count if they are to get the attention of the College Football Playoff Selection Committee as an American Conference contender.

With a 35-10 lead at halftime, the scoring hit a lull in the third quarter with only a single touchdown and head coach Luke Fickell knew that his team had to get going in the fourth quarter. Ahead 42-10, facing 4th-and-6, he successfully called a fake punt to move the chains with a big run.

Cincinnati runs a fake punt up 32 in the 4th! 👀 pic.twitter.com/fUJT5ecEza

The unwritten rules of “sportsmanship” and all of that jibber jabber would label this move disrespectful and unnecessary, considering the 32-point lead. And in the handshake line after the game, ECU head coach Mike Houston pulled Fickell aside for a lengthy discussion, surely about the fake punt and continued scoring.

Cincinnati's and East Carolina's head coaches had a lengthy exchange after the Bearcats ran the score up to 55-17 in the final minutes. pic.twitter.com/shmABfqiSD

However, every point matters when it comes to making a case to receive the opportunity to play for a national title, and Fickell apologized after the game, claiming that it was not a called play. A head coach shouldn’t be forced to apologize for keeping the foot on the gas and winning a game by the biggest margin possible. Houston disagreed and said after the game that “he would not forget tonight.”

Mike Houston on his post game conversation with Luke Fickell: "That’s between us."

During an appearance on College Gameday on Saturday morning, Pat McAfee got in his two cents about the events and had some choice words.

“What I’ve learned in the last 24 hours is that I will never ever, ever bet on on the East Carolina Pirates because their coach is the softest coach I’ve ever seen in my entire life,” McAfee said. “Luke Fickell should’ve asked him to do the Oklahoma drill right on the field and buried him. That’s what I think he should’ve done.”

Co-host Kirk Herbstreit joked in response that McAfee must have wagered on the Pirates.

“What it means is they’re getting mad at him for running that fake punt up 32 (points),” McAfee said. “Hey, Luke Fickell’s got a College Football Playoff spot to go get. … Stop them, Mike Houston. Stop them.”

There are people on both sides of the aisle, but those who back Houston and his logic don’t have a grasp on reality. If you don’t want to lose 55-17, be better.