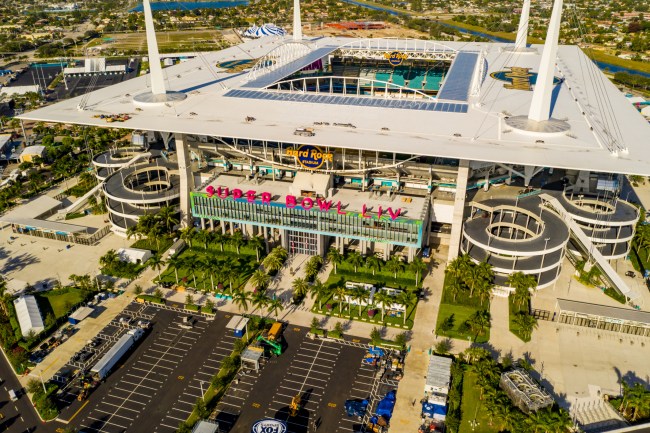 The city of Miami will play host to Super Bowl LIV. The Hard Rock Stadium is one of the best stadiums in America for partying. They have a f’n night club in the stadium! You can get bottle service there and treat it like a night on South Beach. It’s incredible and I highly recommend everyone trying it out one day.

That’s just one example of the nightlife in Miami. A night on South Beach can change a man. You can bankrupt your savings account in an instant. It’s the same as Las Vegas, NYC, or Los Angeles in the sense that there’s really no maximum amount of money you can spend at the club on any given night. The last time I partied hard in South Beach we were in the VIP for a Drake concert with Lil Wayne and Nicki Minaj chilling just feet away (this was during the weekend of El Classico Miami).

I never got a look at the bill that night but I’m sure it was enough to buy an Escalade.

I wasn’t at all surprised to learn that a USA Today report found more players in the NFL get arrested in Miami than any other city in America. I can’t help but think those numbers will change after the Raiders move to Vegas but only time will tell. Here’s what the arrest numbers look like over the past 20 years with Miami coming in at #1:

Antrel Rolle is a former U. of Miami All-American cornerback and Super Bowl winner with the New York Giants and he was quoted in the USA Today piece explaining why Miami ranks #1 for NFL player arrests. Former Hurricane Edgerrin James also added his two cents:

“Guys come down here and they lose their mind,” said Antrel Rolle, a former University of Miami All-American cornerback who went on to win a Super Bowl with the New York Giants. “The women. The free access you have wherever you want to go. They don’t know how to have just one, two, three drinks, they have six, seven, eight and they find themselves belligerent.”
…
…
Former Miami Hurricanes running back Edgerrin James is co-hosting a four-day series of concerts that will culminate with a “Stripper Bowl” the night after the game.
“You have more athletes and celebrities who want to come to South Florida than any other place,” said Randall “Thrill” Hill, a Miami native who played receiver for the Hurricanes and Dolphins. “Why do you think the Super Bowl has been in Miami so many times?” (via)

I went to FSU and have a natural hatred of the Miami Hurricanes but I’ve always been envious of the nightlife the students get down there and that’s for college kids who are broke. Having millions of dollars, a massive ego, and a red carpet rolled out is an obvious recipe for disaster in a place like Miami (and Las Vegas, soon…).

If you’re curious about the factors that go into these arrests, such as racial demographics, the USA Today article dives deep into all that and you can click here to read their article in full.