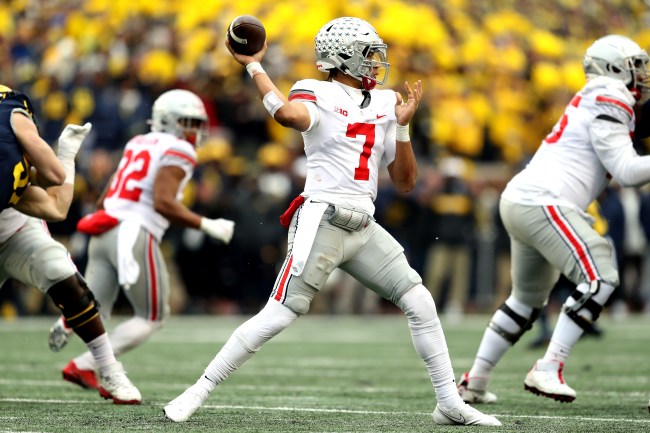 Ohio State was expected to find themselves in the College Football Playoff once again this season, but a couple of surprising losses put them just outside of the top 4 at the end of the season.

Those 2 losses came in the season opener against Oregon and in their last game of the year against Michigan. In spite of the losses, Buckeye quarterback C.J. Stroud still believes Ohio State was better than both of those teams.

CJ Stroud: "We lost two games this year. I don't think either of those teams are better than us.

"But you have to show those teams respect because college football is about which team is the best on that day."

It’s an interesting take from the freshman QB. I could absolutely see the argument that Ohio State is a better team than Oregon right now. The Ducks simply haven’t looked good since that win.

The Buckeyes will also get the opportunity to show they’re better than Oregon in their bowl game. They are set to take on a Utah team that destroyed Oregon twice in the last 3 weeks.

On the other hand, it’s really difficult to understand the assertion that Ohio State is better than Michigan. The Wolverines just ran all over Ohio State en route to a 42-27 win and the Buckeyes didn’t give us much reason to believe a rematch would end differently.

If those losses actually were just bad performances from Ohio State then they’ll need to do everything they can to avoid another one at the Rose Bowl. Utah is playing great football right now and a loss to them will make Stroud’s quote seem even more ridiculous than it already does.