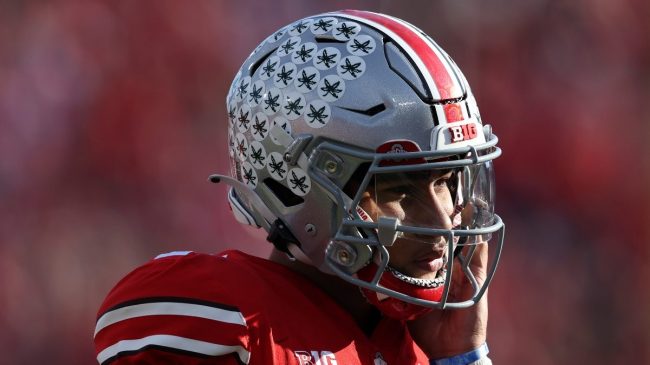 CJ Stroud quickly became the talk of the town after a strong performance in the 2021 season. The Ohio State Buckeyes are one of the nation’s top college football programs and their young quarterback plays a huge role in that. However, new details have emerged of how Stroud quickly became a top NFL prospect in just one week while he was still in high school.

CJ Stroud Went Bonkers At A Nike Sponsored Event In 2019

It was a sizeable event for the top football prospects in high school. Some, like Bryce Young, showed up with a reputation. However, CJ Stroud entered the camp as a three-star recruit with the Pac-12 and Mountain West mainly on his radar. However, it didn’t take long for Stroud to turn heads.

Apparently, Jaxon Smith-Njigba, who had already committed to Ohio State, called up head coach Ryan Day to sign CJ Stroud immediately, per The Athletic. He claims he said on the phone, “We need to get this guy. He’s special.”

That might be the best way to describe Stroud’s abilities. According to The Athletic, he “didn’t have a private coach who had been grooming him for years before he became a high school starter.” Instead, CJ Stroud utilized pure talent and work ethic and it eventually paid off.

After showcasing his skillsets he was able to quickly become one of the NFL’s top prospects. He now leads the Ohio State Buckeyes for what should be his final season in college football. CJ Stroud understands that week at the Nike-sponsored event spurred his future career in football, saying, “That week was what changed my life.”