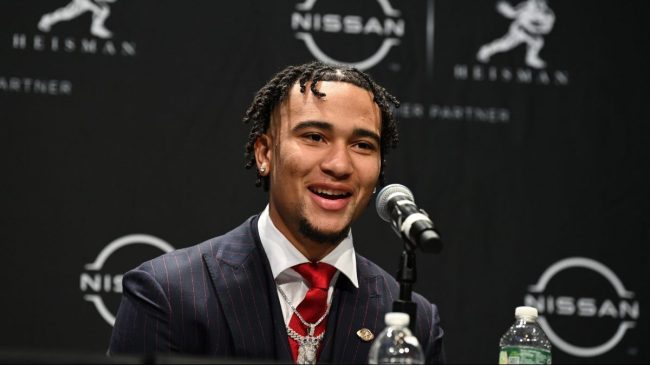 Ohio State quarterback CJ Stroud is one of the best college football players in the country. The California native was a Heisman Trophy finalist in 2021 after throwing for 4,435 yards and 44 touchdowns with just six interceptions.

The third-year quarterback enters the 2022 season as the Heisman Trophy favorite and is hoping to lead the Buckeyes back to the College Football Playoff. Stroud also set some pretty lofty individual goals for the new season.

The star QB’s on-field success has also made him a huge star off the field. His $2.5 million NIL valuation by On3 is fifth among all college athletes and second only to Heisman Trophy winner Bryce Young of Alabama among college football players.

Stroud recently spoke out about universities and conferences sharing the wealth with college athletes. Now he’s practicing what he preaches.

One of Stroud’s first name, image and likeness deals was with Columbus, Ohio-based retailer Express. The nationwide fashion brand agreed to deals with both Stroud and teammate Jaxon Smith-Njigba.

“They’re outstanding athletes and they’re right here in our hometown,” Express Chief Marketing Officer Sara Tervo said at the time of the deal.

Stroud’s deal not only benefits him, but now it’s benefiting his teammates as well.

Ohio State shared a video on Twitter on Thursday of Stroud making a special announcement to his teammates. He gifted each one of them a $500 Express gift card to buy new suits prior to the Buckeyes’ season-opening game against Notre Dame.

Stroud will appear in ads for Express and promote the brand on social media as part of the deal. Additionally, he will take part in live streaming events as well as making in-store and other online appearances.

Ohio State is currently a 17-point favorite against the Fighting Irish, something new Notre Dame coach Marcus Freeman is using as motivation.

One thing is certain. The Buckeyes are going to sharp when they roll into the Horseshoe on Saturday night.