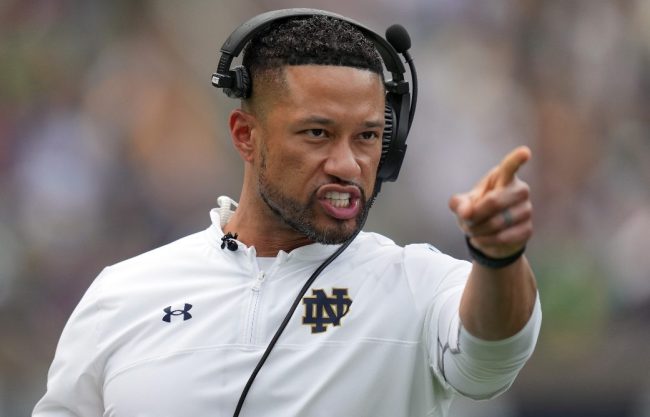 We have some huge matchups to kick off the college football season as the Notre Dame Fighting Irish take on the Ohio State Buckeyes in Week 1. It should be a fun matchup, as both schools start the season ranked within the top five. However, the Buckeyes are heavily favored and the Notre Dame head coach, Marcus Freeman, isn’t having any of it.

As of this posting, Ohio State is favored by 17.5 points in the spread. That’s a rather large difference, especially considering the Fighting Irish is ranked fifth to start the season. Regardless, Marcus Freeman made sure to keep the current spread in mind as he’s clearly going to share the information with his team, per the Action Network.

Bulletin board material seems to go hand-in-hand with sports. Tom Brady and Michael Jordan have essentially built their careers off of it. Due to the current spread, Marcus Freeman is likely firing up his team to go out there and shock the world in Week 1. If they can do that, then Notre Dame should be viewed as a legit contender for the National Championship.

Even though Las Vegas is scary accurate in depicting the odds and spread, the Fighting Irish are going to do everything possible to upset Ohio State. You’re not going to want to miss this game as it should be electrifying throughout. Make sure to tune into ABC at 7 P.M. Eastern on Saturday and see if Notre Dame has what it takes to take down the Buckeyes.