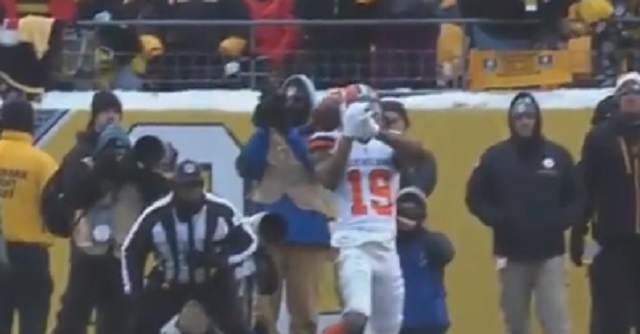 The Pittsburgh Steelers had basically thrown in the towel at the end of 4th quarter of today’s game by benching most of their starters but that didn’t matter because the Browns are terrible.

On fourth down and two on the 25 yard line, the Browns had an opportunity to convert a first down and get into scoring position to win the game. Unfortunately for the Browns, Corey Coleman developed a bad case of the butter fingers and dropped a perfectly thrown pass towards him.

Cleveland fans are set to celebrate the Browns 0-16 “perfect season” with a parade next week that is going to be sponsored by Excedrin for whatever reason.

a ‘Perfect Season Parade’ has been scheduled for Jan. 6. Fans would gather and march around FirstEnergy Stadium in Cleveland, Ohio. To ensure that the parade goes as planned, Excedrin has donated $8,000 to the cause.

“All sports fans have felt a team, game or even single play-induced headache at some point. This season has been especially painful for Cleveland football fans. We want them to know we understand their pain and we’re here to help,” Excedrin’s Senior Brand Manager Scott Yacovino said in a statement.

Gotta feel bad for the Browns but at least they have two top 5 picks in the draft next year.