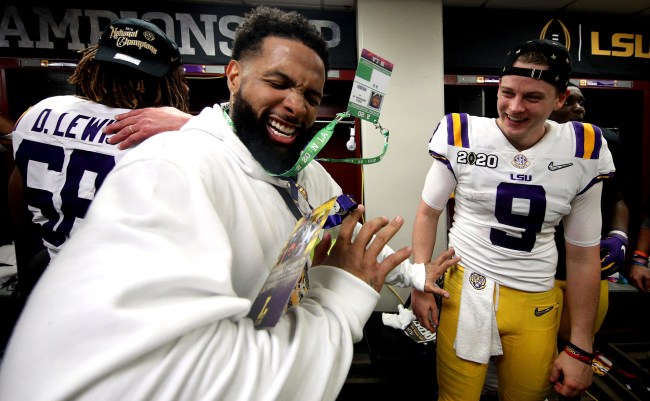 In case you’ve been on some sort of Internet and social media cleanse for the past few days, you’ve missed quite a bit when it comes to the LSU Tigers, alum Odell Beckham Jr., and a certain cop’s rear end.

After the Tigers came from behind to beat Clemson in the national championship game, OBJ decided to do a little bit of celebrating with LSU. It all started with him handing out cash to Joe Burrow and other LSU players, but that was only the beginning.

LSU decided to light up some cigars in the locker room following the win which didn’t sit too well with a number of police officers in the building as it was reported that they threatened to arrest players for smoking in the room.

Well, OBJ was in the locker room when all of this was going down and didn’t really like officers telling players to put out their stogies so he decided to slap one officer square on the ass. As a result, the New Orleans Police Department has issued a warrant for his arrest.

“A law enforcement source told WDSU the simple battery warrant was signed by a judge Thursday morning. The NOPD’s official statement says the misdemeanor warrant was issued “in regards to an incident that occurred on January 13, 2020 at the Mercedes-Benz Superdome.”

According to Nola.com, police had initially sought a warrant for a misdemeanor sexual battery charge, but that was declined by a judge. It was re-written as a count of simple battery, which has been approved.

Since the news of the arrest warrant, the Browns has released an official statement regarding the incident indicating they are aware of what happened and have been in touch with OBJ and his representatives on the matter.

At the end of the day, OBJ opened his hand up, and slapped an officer’s ass while the person was doing their job, which is not the best of looks.

Just another incident of OBJ being OBJ; constantly being there and having to have some sort of attention floated his way.