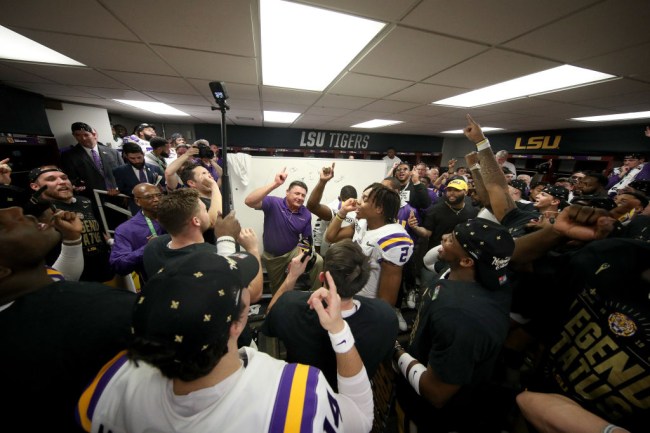 LSU came back to beat Clemson to win the national championship 42-25 on Monday night and as you’d expect, the Tigers did some celebrating in their locker room.

After Ed Orgeron was caught picking his nose, the Tigers decided to light up some celebratory cigars inside the locker room, which apparently didn’t sit too well with the police in the building.

According to AL.com, cops threatened to arrest any of the players smoking cigars in the locker room.

A police officer threw water on the party when telling the national champions they could not smoke the cigars that burned for easily 15 minutes after beating Clemson.

In fact, the officer announced to the players any smoking cigars in the locker room would be subject to arrest. Several players holding stogies laughed at the warning like it was a joke but the cop wasn’t smiling.

Another officer tried to tell them it was OK to celebrate with a smoke in the locker room but he insisted his commander told him it was a no-go.

Easily the best part of this report is the officer announcing the threat and the players literally laughing at the warning.

Joe Burrow sucking on a cigar and blowing smoke into the air while exiting the #LSU locker room is a thing that has happened. pic.twitter.com/9B0hzqz31M

Let’s not forget that the title game was played at the Superdome in New Orleans, also known as LSU’s backyard. Imagine being that officer walking into the room like some big shot and telling a room full of hyped-up national title winners to put out their cigars.

Orgeron probably mumbled something harsh to the officer, the players laughed and the cigars kept a flame.

Nick Saban and Alabama players light up cigars after every single big win and I don’t think officers are walking into that locker room if it’s Saban and the tide lighting up cigars.