Cleveland Indians Call The Mets A ‘Fringe Playoff Team’, Proceed To Get Swept And Dunked On By Noah Syndergaard 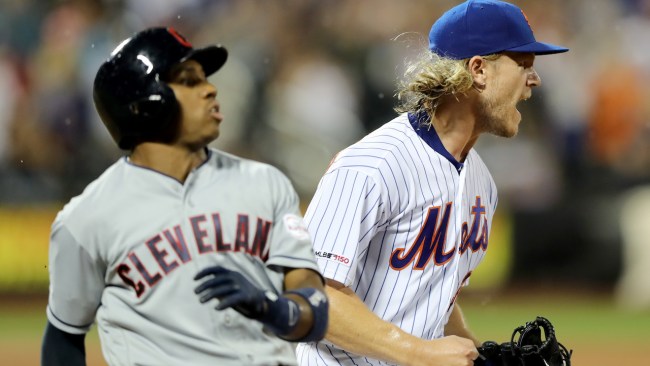 Social media is a tricky game, considering the entire goal of being a social media manager/coordinator/content creator is to please as many people as possible on platforms that are quite literally known for the opposite.

However, that said — as a New York Mets fan — I have ZERO sympathy for the ass hat team behind the Cleveland Indians social media because they dug their own grave with a shovel made out of their own stupidity.

Last night, the Cleveland Indians Twitter account — apparently confusing themselves for the Indians management — felt the need to release what sounded like an official statement about the team’s current run of form.

“It’s a long season. We didn’t erase an 11.5-game deficit to roll over. We split a series with one of the best teams in MLB at their home ballpark. We lost the last 2 to a fringe postseason team. We understand your frustration. Get it out here, but let’s renew the perspective,” the tweet read.

I mean, what the hell is that? That’s the type of quote you’d hear from the team’s manager, not their fucking Twitter account. Not only are they taking their job way too seriously, but they directly disrespected another team and fan base.

It's a long season.

We didn't erase an 11.5-game deficit to roll over. We split a series with one of the best teams in MLB at their home ballpark. We lost the last 2 to a fringe postseason team.

We understand your frustration.

Get it out here, but let's renew the perspective. pic.twitter.com/qddlITqsjZ

So, naturally, after getting their asses swept three games in a row by said “fringe playoff team”, essentially all of the New York Mets fans on Twitter — including ace pitcher Noah Syndergaard himself — hopped into their mentions to absolutely body bag them and their awful social media strategy.

Or fire the guy who lost his computer instead. I suggest the social media guy. https://t.co/iwdNdFs7K8

We got some FRINGE for you right here, we call it a SWEEP in NYC. #LFGMhttps://t.co/d2OtJLujaz

And that, that right there folks, is why Noah Syndergaard is a modern-day Mets legend: he’s literally chirping the team he’s pitching against during the middle of a rain delay, talking that good shit (never forget when he essentially challenged the Royals to fight him when he was a rookie).  Just a savage.

As a Mets fan myself, I also felt obliged to get in on the fun: