Clippers’ Montrezl Harrell Apologizes To Luka Doncic For Calling Him A ‘P-ssy Ass White Boy’, Doesn’t Get Fined Or Punished By The NBA 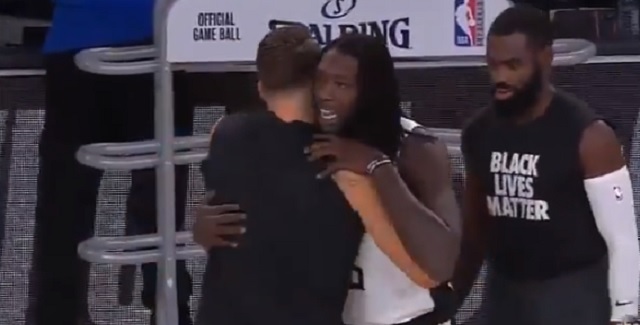 The Montrezl Harrell-Luka Doncic situation appears to have been squashed.

On Friday night, Harrell was seen calling Doncic a “pussy ass white boy” after scoring on the Mavs star.

After the incident, Clippers head coach Doc Rivers sat down with Harrell to let him know that he can’t be saying stuff like that.

Via Chris Mannix of Sports Illustrated

You just have to be careful,” Rivers said. “They both were talking. I don’t think Luka was saying anything racial, but he was swearing. So they both were doing it. It’s an emotional game. It’s a playground game out there in the playoffs. I said to him, ‘Hey, I don’t think you meant anything racially by it.’ He said ‘white boy,’ but I don’t think there was anything racial intended. But we are in a very heightened climate and you have to be careful. Trez was the first one to say that. He said, ‘I didn’t mean that racially.’ And I said it doesn’t matter. It’s what’s perceived … make sure you do the right thing.”

According to Rivers, Harrell reached out to Doncic to apologize.

“They squashed it,” Rivers said. “Luka, I guess, was shocked that he needed to reach out.”

Before Sunday’s Clippers-Mavs game 4, Harrell could be seen apologizing to Luka for the comment.

The NBA reportedly talked to Harrell about the situation but chose not to punish him.