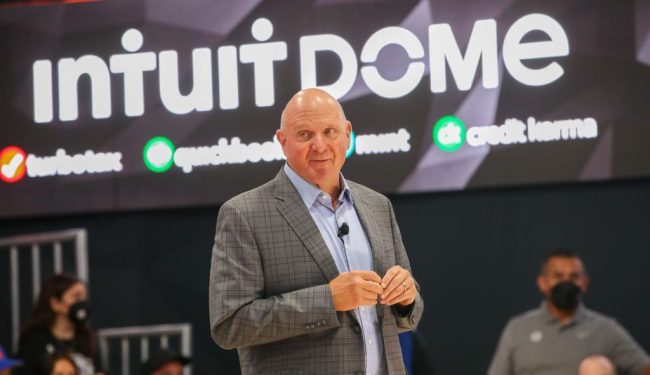 Clippers owner Steve Ballmer is worth $100 billion, but he is only focused on one thing— toilets. The 65-year-old is redesigning his team’s new arena and a big focus is going to be the bathrooms.

Introducing the @IntuitDome.
Future home of the LA Clippers.

The arena, in his words, it is going to be better than the Hall of Fame.

“I like to think about it as a basketball palazzo, an homage to the game,” he said, per The Washington Post. “It’s not the Hall of Fame, but with as many championships as we’re going to win here, it’s going to be better than the Hall of Fame.”

When Ballmer bought the franchise for $2 billion in 2014, was initially content to play at the Staples Center. Within a year, however, he was no longer content with sharing a facility with the Lakers and Clippers.

Ballmer believes that the team needs its own arena to build its own identity. That arena, the Inuit Dome, will cost him nearly as much as the team itself.

While everything in the arena will be brand new and equipped with all of the bells and whistles, fan experience is at the forefront.

In particular, Ballmer is determined to revolutionize the way that fans use the bathroom. He does not want lines and wants to be sure that they can be in and out of the bathroom during stoppages of play.

The Clippers even commissioned a computer model to project how long it would take fans in a sold-out arena to use the restroom, purchase food and return to their seats. To ensure that fans could complete the process during the length of a standard NBA timeout, the arena design boasts one toilet for every 27 seats in the upper deck, an unmatched ratio in the NBA

“The thing I hate most in life is arenas where you have to wait in line for the bathroom,” Ballmer said. “I’ve become a real obsessive about toilets. Toilets, toilets, toilets.”

Ballmer’s vision is pretty remarkable. One toilet for every 27 fans is simply unheard of, but it couldn’t be a more valiant effort.

Steve Ballmer is out here doing the lord’s work.