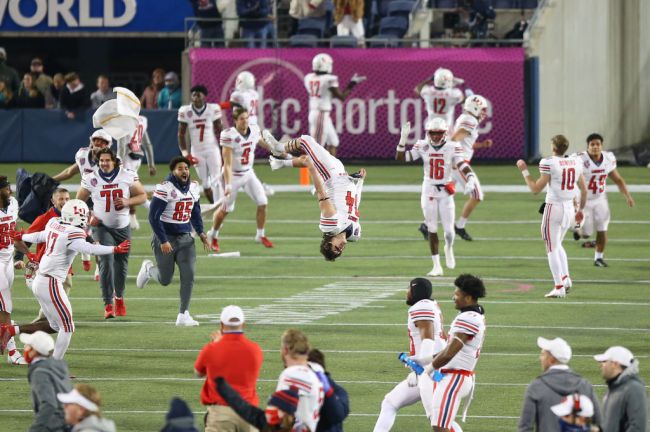 Liberty football spoiled Coastal Carolina’s perfect season with a 37-34 overtime win in the Cure Bowl on Saturday, but the win was nearly squandered in the final seconds of regulation. After jumping out to a 14-0 lead after the first quarter and a 17-13 lead at halftime, the Flames allowed the Chanticleers to battle back and tie the game with three minutes left. Quarterback Malik Willis and running back Joshua Mack took over and engineered a seven-play, 74-yard drive to set up a 1st-and-goal with 1:25 on the clock. Coastal Carolina didn’t have any timeouts remaining and Liberty elected to play for a game-winning field goal. Mack got the ball and made sure not to break the pylon, taking the clock down as much as possible.

He took the handoff on second down and intended to do the same thing. However, his momentum carried him forward and led him toward the goal line. In an effort to keep him out of the end zone, his offensive lineman knocked the ball loose and caused a fumble. The loose ball was recovered by the opponents.

Coastal was unable to capitalize on the turnover without any timeouts and less than a minute remaining, but the blunder led to an overtime period that would determine the result. The two teams were scheduled to meet on December 5th, but COVID-19 issues in the Liberty locker room forced a postponement and led to BYU taking its place. Throughout the weeks leading up to the original matchup and in the weeks following, both sides talked a lot of smack. The Chanticleers have been playing loud all season and could be considered the “bad boys” of 2020. From linebacker Teddy Gallagher rocking a bleach blonde mullet, to quarterback Grayson McCall hip-tossing defenders, the swagger was abundant. It all came to a halt in overtime.

The Flames began with the ball and had to kick a field goal. Their defense held strong and forced a 42-yard attempt that would send it to a second overtime. Liberty blocked the kick, ending the game of the year in dramatic fashion and playing the spoiler.

Liberty became a provisional FBS team in only 2018 and has become a non-Power 5 force in two years — capped by their second consecutive bowl win on Saturday. Led by disgraced former Ole Miss head coach Hugh Freeze, the Evangelical Christian school finished the 2020 season at 10-1 with its only loss on the road to a top-25 North Carolina State team by one point. The quick rise to prominence in Lynchburg is impressive.