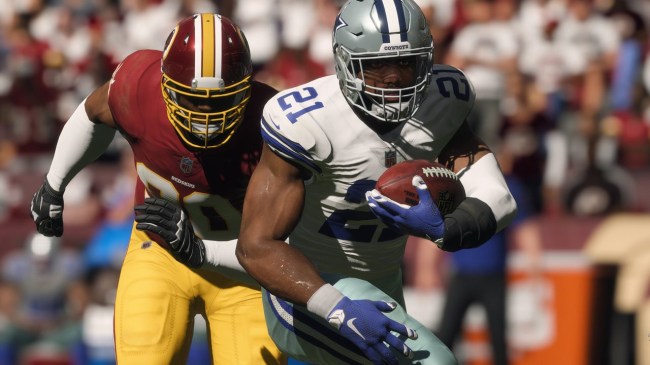 If you’ve ever gotten a little too invested in a game of Madden, you’ve likely come to love the dopamine rush that comes when you reach a point in the game where your opponent has virtually no shot of coming back. If you’re a traditionalist, you’ll run a few plays up the middle and milk the clock, but if you feel like being a dick, it’s a perfect time to do something like pull out a fake punt return or put a running back at QB and call a Hail Marry to rub things in just because you can.

Over the weekend, a particularly cocky Madden player was up nine points with under 30 seconds remaining in a game that was all but over. His opponent needed two scores to get back into the contest, and the guy in the lead was nice enough to help out by calling an objectively disrespectful timeout to help extend the life of the game.

However, as you’ll soon see, that decision didn’t cost him as much as the one he made after what should have been a game-ending onside kick.

I’ve spent multiple hours watching professional cornhole tournaments on ESPN 2, and while I don’t envision a future where I’m sitting down to watch other people play video games on a regular basis, I’m not going to hate on the rise of esports if it means we get more clips like this.

The streamer also got a shoutout from the Falcons for his dramatic comeback.

I’m sure they were glad to see another team on the receiving end of an incredibly unlikely come-from-behind victory.