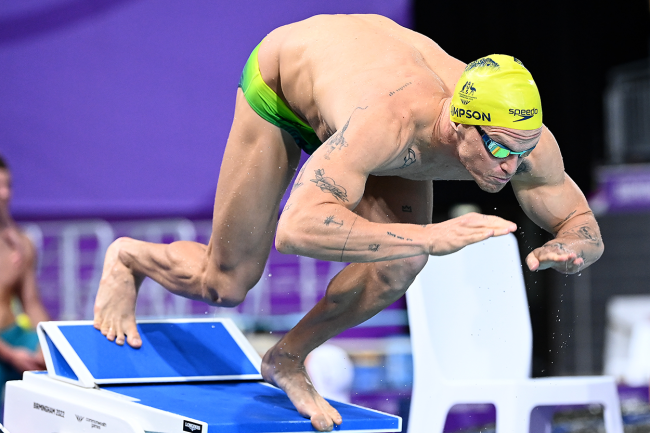 Cody Simpson has had an incredibly unique career. The 25-year-old Australian began his rise to fame as a pop musician with three certified gold singles.

The first, released 12 years ago, featured Flo Rida and sparked his skyrocket to stardom. It has more than 27,000,000 views on YouTube and a large number of girls between the age of 10 and 20 can probably sing the chorus.

While Simpson’s musical catalog goes well beyond a teen heartthrob, that is where he found the most success at the beginning of his career. It led him to performances on Disney Channel, Radio Disney and even brought him a few Nickelodeon Kids Choice Awards.

Since really bursting onto the scene as a 13-year-old, Simpson has gone on to release four studio albums, with his most recent having dropped this year. He has toured with Big Time Rush, Justin Bieber, Greyson Chance and has headlined four tours of his own.

Simpson was, and still is, a pop star. But that isn’t the only thing that defines him these days.

Simpson is also a professional swimmer. And a pretty darn good one at that.

I’m proud to announce I have signed with @speedo & am officially swimming professionally. It marks the accomplishment of a dream I’ve had since I was a little boy. Stoked to have their support moving forward through to 2024, beginning with my first Australian team. @SpeedoAus pic.twitter.com/d8kryuFcz4

Earlier this year, Simpson was selected to compete for Team Australia at the 2022 Commonwealth Games after finishing third in the 100m butterfly event at team trials. He says that swimming was an itch that never went away and that led him to get back into the sport.

Ultimately, after a few years of training, Simpson is “pretty much 100%” focused on swimming. Considering his stardom as a singer/songwriter, his story is rather unique.

Let's take a look back at the journey he's been on to get to this point ⬇️#CommonwealthSport | #B2022 | @CommGamesAUS pic.twitter.com/4k6YUCYxtt

And now his journey is only getting crazier.

Simpson took to the pool on the opening day of the Games in Birminham on Friday and finished second in his heat for the men’s 50m butterfly. As a result, the singer-turned-swimmer advanced to the semifinals in the event.

When he gets there, Simpson will have an interesting opponent— his fellow countryman, Kyle Chalmers. While that may not seem like a big deal, because people from the same country race against each other all of the time, it is their story that makes it spicy.

Before Simpson, McKeon was dating Chalmers. Now Chalmers and Simpson are set to race against one another in the 50m butterfly semifinal at the Commonwealth Games this weekend. It’s a wild twist to an already incredible transitionary story from pop star and heartthrob to swimmer for Simpson.