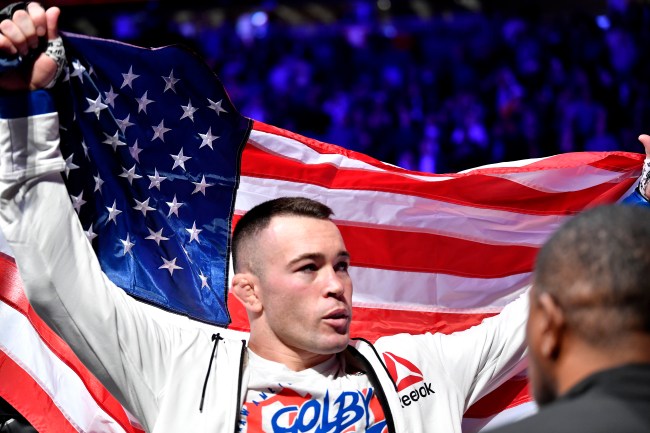 The upcoming UFC London card, which was scheduled to take place on March 21st, is currently in jeopardy after Dana White was forced to pull the card and move it to the States due to the UK facing a travel ban during the coronavirus outbreak crisis.

UFC London not happening in London anymore. They are working on finding a new city/venue for the card in 7 days.

UFC Columbus and Portland not happening at Apex in LV anymore. Working on new locations.

UFC 249 likely not in Brooklyn/Vegas. Working on new locations.

Leon Edwards, who was set to fight Tyron Woodley in the main event of UFC London, decided to excuse himself from the fight because he said travelling at this time of crisis would be too difficult for his team.

Despite the fact that Edwards pulled out, Woodley still wants to fight on the card and called out Colby Covington specifically.

He wants to fight. And he is ready to fight, he said.

He has shut off all media and didn’t even know Edwards was 100% out.

He has told his management he is interested in a particular opponent: pic.twitter.com/nZsELKyjyJ

"Colby Covington is my number one choice… this would be the biggest delight."

Tyron Woodley says he wants to fight Covington on Saturday, even though "he's declined me four f—ing times." (via @TWooodley) pic.twitter.com/70OrFIT6Yw

Covington immediately offered himself up to fight Woodley in a pair of NSFW posts on Twitter.

Word on the street is @LeonScott is out. The @ufc and America need a hero. Who wants see America’s Champ put the #MAGA cape on and beat the fuck out of @twooodley live on @ESPN next week for your entertainment and my own personal pleasure? 🇺🇸🦅🇺🇸

America’s Champ has let the @ufc know he’s available to #KAG and slap the shit out of @twooodley live on @espn for the people! Someone let Tyrone know. That dip shit has me blocked on all platforms because my words “hurt his precious little feelings.” 🇺🇸🦅🇺🇸

It’s unclear if the fight card will still happen considering most cities are beginning to go on lockdown due to the coronavirus crisis.