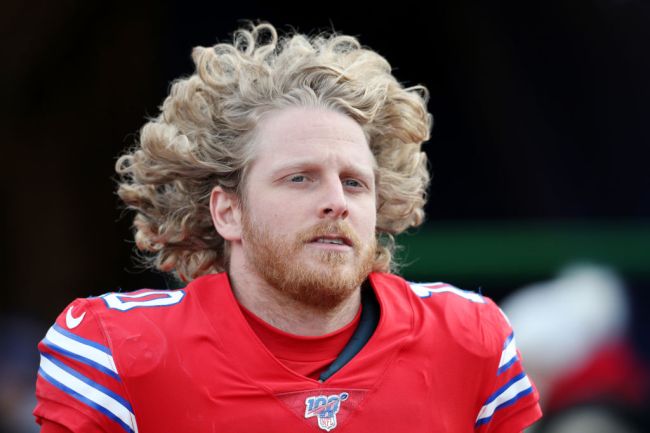 You know you’re in the doldrums of summer with no meaningful football in arm’s reach when the biggest story coming out of the league is Cole Beasley’s Health Expertise.

For those still throwing digital arrows at Julian Edelman Lite, give your fingers a rest. You are embarking on a futile endeavor. The dude who looks like he brushes his teeth with Surge is not getting poked.

He already said as much in June in a long-winded Notes admission typically fit for a felony charge.

The NFL and the NFLPA’s recently announced its plan to not only limit players that are not vaccinated for COVID-19, but force teams to forfeit and withhold pay if they cannot play scheduled games due to a COVID-19 outbreak among unvaccinated players/personnel.

Beasley, who’s made $45 million in salary in 9 seasons in the league, has made it abundantly clear on Twitter that he is rich and you are poor.

The NFL’s hard-line stance on unvaccinated players has only hardened the 32-year-old’s stance on not using protection.

One thing I learned from working on the internet is that despite how biting you believe your online burn to be, it will always, with zero exceptions, do the opposite of what you’re intending. Minds are not changed on the internet.

Nothing has changed. I’m still a dumbass. Goodnight. https://t.co/ylvMhZWrD9

This bitch gets $14,400,000 guaranteed, and an average annual salary of $7,250,000 playing a fucking football game, refuses to get vaccinated and has absolutely no regard for anyone but himself. https://t.co/LXw15PN5ZI

He’s trying to get cut so he can become a right wing cult super star. It’s quite the play for an over the hill overpaid mediocre wide receiver. I wish I could say I’m surprised people are falling for this, but ya know, they also think Covid “ain’t that bad” https://t.co/PKK73mlwn7

YOUR A FUCKING MORON!! GET VACCINATED ASSHOLE!!! https://t.co/wVEikdk2ns

DeAndre Hopkins deleted a tweet that said he would "question" his future following the league's announcement of a new COVID policy.

The policy caused ripples throughout the league, with players reacting to the news on social media and at training camps. https://t.co/Xop0TxMJUK