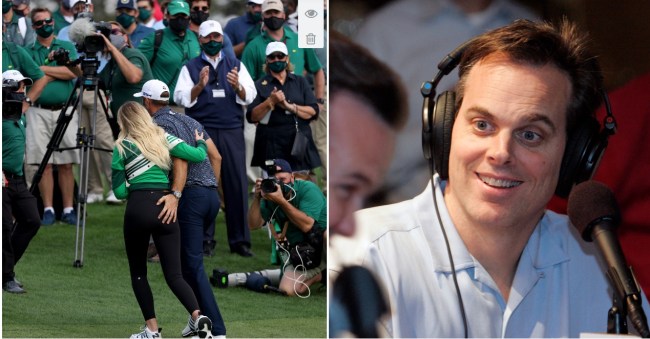 Dustin Johnson pulled off a historic outing at the 54th Masters on Sunday when he set a course record 20-under par to win his first green jacket and second major of his career.

Of course, Johnson wasn’t the only person in the spotlight on Sunday. Johnson’s fiancée Paulina Gretzky was front and center in Augusta as she donned her own green jacket.

The viral photo of the Masters Sunday ended up being one that featured Johnson and Gretzky walking off the course with some interesting hand placement by DJ.

DJ and Paulina riding off into the sunset pic.twitter.com/SnEE9PDXlX

FS1’s Colin Cowherd had his own strange reaction to the Paulina/Dustin Johnson picture.

Congrats… on everything, Dustin Johnson. pic.twitter.com/UpdLMuuUsl