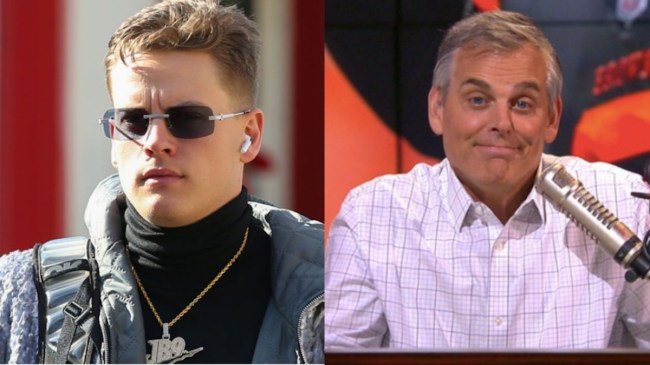 Following Sunday’s overtime loss to the Pittsburgh Steelers, Cincinnati Bengals fans were likely hoping that all of the team’s focus would be on next week’s matchup against the Dak Prescott-less Dallas Cowboys.

It would appear, however, that this week — and every week this season — quarterback Joe Burrow’s attention will be temporarily elsewhere as it’s been announced that the 25-year-old signal caller will be hosting a weekly podcast with none other than Colin Cowherd.

Following the announcement, a majority of the responses expressed concern for where Burrow’s heads at heading into the season, especially considering his putrid Week 1 stat line that saw him toss four interceptions:

This is a terrible idea. pic.twitter.com/upD9DnWbyW

So cringe how every media company is copying @PatMcAfeeShow lmao https://t.co/fvjWpDlmjY

I don't know how to properly react to this https://t.co/jVRDmfmxlh

Last season, Burrow led the Bengals to the Super Bowl in just his second season in the National Football League. The Bengals ultimately lost Super Bowl LVI to Matthew Stafford and the Los Angeles Rams by a score of 23-20.

Heading into the season, the Bengals weren’t even in the Top 10 favorites to win this year’s Super Bowl, as they were even behind the likes of the Baltimore Ravens and Minnesota Vikings with their +2500 odds.

RELATED: Joe Burrow Started Off The Season In The Worst Way Possible, Commits 4 Turnovers In First Half Vs Steelers