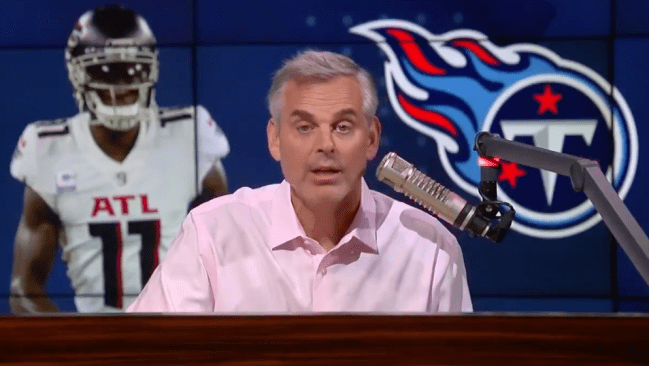 The Tennessee Titans undoubtedly got better with their addition of Julio Jones. How much better and what sort of impact he’ll have in Nashville are the obvious questions now, and Colin Cowherd appears to think he has the answers to each.

The Fox Sports host isn’t sold on Tennessee’s trade for Jones and made some strong points as to why he doesn’t see the wideout making that big of an impact, certainly not one that matches social media’s immediate reaction after the trade became official.

After Cowherd can’t resist comparing Jones move to the Titans to Odell Beckham Jr to the Browns and taking a shot at Baker Mayfield, he admits that Jones is no longer in his prime. That isn’t his main argument as to why Jones’ move to the Titans may not be all that great, it’s the fact that the Titans are a run-first offense. Tennessee attempted the third-fewest pass attempts in the NFL in 2020.

While Ryan Tannehill and the Titans could attempt more passes next season, they aren’t going to completely flip the scripts on their philosophy as long as Derrick Henry is still in that backfield. The team also has a new offensive coordinator after losing Arthur Smith to Atlanta, so that too could throw a wrinkle into Jones’ success next season.

Here’s Cowherd’s full explanation as to why Jones may not be the game-changing, elite wide receiver for the Titans next season:

"Julio Jones is great, but this is a run culture. Does it make Tennessee better than Kansas City? No. Buffalo? No."

Cowherd is no stranger to making some unique comparisons, but his line about the Titans having Jones is like having the nicest pool in Seattle may be his best yet, it’s great and actually makes a whole lot of sense.

At the end of the day, if the Titans’ defense doesn’t take big strides next season then this team doesn’t have anything close to a legitimate shot at hanging with the other top teams in the AFC.