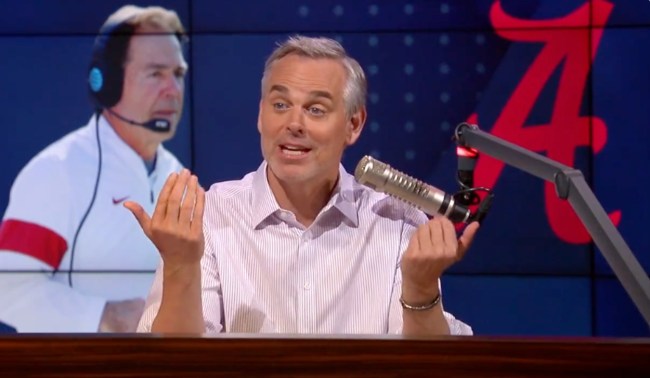 After Nick Saban shared his very honest opinion about Texas A&M and head football coach Jimbo Fisher on Wednesday, everyone in the sports media world is sharing their reactions and hot takes about the situation. To no real surprise, Colin Cowherd’s opinion about the drama goes a bit against the grain.

Saban went on the rant of all rants about NIL on Wednesday night and specifically called out Texas A&M for buying players.

There’s no denying that Saban’s rant was personal, which is the biggest issue Cowherd had about the whole thing. He went as far as to call the Alabama head coach a “hypocrite” as well.

“Nick [Saban] is being a hypocrite,” Cowherd explained. “Nick said it for a reason. Nick made it personal. Nick went over the line.”

“Nick needs to apologize. There’s no proof Texas A&M is buying players…He ripped a coach, he ripped a program. It’s unprofessional and he frankly is held to a higher standard.”

"Nick Saban needs to apologize… He ripped a coach, he ripped a program. It's unprofessional and he frankly is held to a higher standard."@ColinCowherd defends Jimbo Fisher pic.twitter.com/oDRSz9QAwT

It’s clear that Cowherd is on Team Fisher, at least at this point in time.

It didn’t take Fisher long at all to clap back at Saban. He called a press conference on Thursday morning and called the Tide’s head coach a “narcissist.”

“The narcissist in him doesn’t allow those things to happen, and it’s ridiculous when he’s not on top. The parody he’s talking about in college football, go talk to coaches who coached for him, you’ll find out all the parody. Go dig into wherever he’s been, you can find out anything.”

The Crimson Tide and Aggies will do battle on October 8 this year, and the whole college football world can not wait.