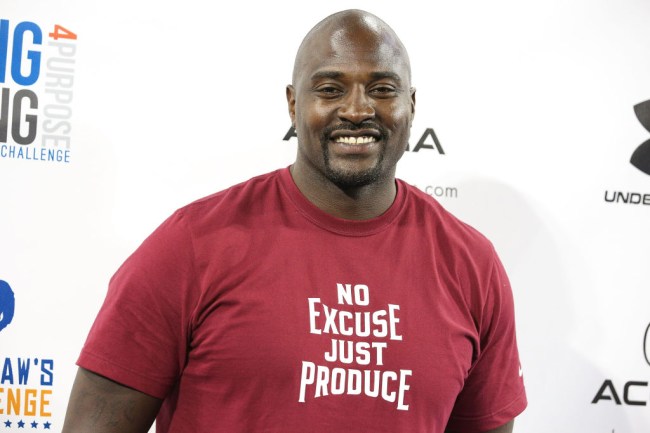 Pro Bowl defensive end Marcellus Wiley went all in on the continuing Colin Kaepernick controversy. The former NFL player turned sports talk host said he is done giving Kaepernick a pass because Colin does not know the “full weight” of injustice because he’s “mixed race.” This comes a day after rapper Freddie Gibbs called out Kaepernick and anyone who attacked Jay-Z.

Wiley weighed in on the hot-button topic of Jay-Z’s new business partnership with the NFL and was particularly outspoken of how Kaepernick and the people surrounding him are not qualified to be leaders in the civil rights movement. On Fox Sports 1’s Speak For Yourself on Tuesday morning, Wiley defended Jay-Z new business deal with the NFL that includes Roc Nation organizing the Super Bowl halftime show as well as a new $89 million social justice initiative.

“From day one, I was against him kneeling. I said, ‘Get up and get those resources because where we’re from your kneeling before kickoff has nothing to do with our situation unless you translate that, materialize it and monetize it,” Wiley continued. “Jay-Z waited long enough and said, ‘I gotta pass this dude to get this right.'”

Wiley said the identity of the kneeling movement has been “lost” because the “identity of those who are leading it has always been in question.” “My pass has expired for this,” Wiley declared.

Then Wiley went after Colin Kaepernick and doubted that he could be an effective leader for the civil rights movement.

“Kaepernick comes from a situation where he never felt the full weight of these injustices,” Marcellus said. “This is a mixed race guy who was raised by a white family from Wisconsin to central California. Respect — that does not disqualify you from talking for us but when you make misteps and miscalculations, oh, it comes back into play.”

“And he never spoke on this when the Black Lives Matter movement was at its height. Think about it, 2013, 2014, Ferguson, when Jay-Z was bailing prisoners out and protestors out, taking pictures, and supporting Trayvon Martin and that family,” Wiley said. “Where was Kaepernick? You know where he was? Taking his shirt off bruh.”

“I knew Kaepernick back then, he was NEVER talking about this,” Wiley said. “He meets Nessa in 2015, all of the sudden he gets benched, flip flop.”

“But Nessa comes into play now, and we all know Nessa,” Wiley said. “Respect to her and her ethnicity, but it’s not black.” Kaepernick’s girlfriend, Nessa Diab is a radio DJ whose parents are from Egypt.

“Now we got two leaders who don’t even feel the weight of their consequences,” Wiley says as he ends his rant. “So guess what you are allowed to do right now — have CONVENIENCE.”

Marcellus Wiley says his “pass” for Colin Kaeprnick has expired. Doesn’t think Kap and Nessa are qualified enough to lead the movement the way they’ve been due to not being fully black. This is getting uglier by the day pic.twitter.com/NUMBByeMBy

Wiley continued to assail Kaepernick on Twitter and shared an old tweet where Colin said: “I want in on the ownership group! Let’s make it happen!” Kaep was tagging a Diddy tweet that discussed owning an NFL franchise.

They: Jay-Z is a sellout for partnering with the @NFL & not checking in with @Kaepernick7

In another tweet from Wiley, he called out Kaepernick, Eric Reid and Nessa. “Tired of @Kaepernick7 @E_Reid35 talking sh*t about @S_C_ @BigBoi @MalcolmJenkins Who in their right mind calls other brothers sellouts that are working for the same cause, just differently? It’s someone whose intentions are fake! Someone seeking CREDIT b4 the CAUSE! @nessnitty.”

Kaepernick’s former San Francisco 49ers teammate and fellow activist Eric Reid has criticized Jay-Z for his new alliance with the NFL because of Kaepernick’s alleged blackballing in the National Football League.

Jay-Z doesn’t need the NFL’s help 2 address social injustices. It was a money move 4 him & his music business. The NFL gets 2 hide behind his black face 2 try to cover up blackballing Colin. #NeoColonialism https://t.co/tO49a1JC2c

My Brothers @E_Reid35 @KSTiLLS @iThinkIsee12 continue to fight for the people, even in the face of death threats. They have never moved past the people and continue to put their beliefs into action. Stay strong Brothers!!! ✊🏾 pic.twitter.com/OQClsZXD5V

Jay-Z recently discussed Kaepernick’s role in the social justice movement and said “we’ve moved past kneeling.” “I think that we forget that Colin’s whole thing was to bring attention to social injustice,” the rapper said. “In that case, this is a success. This is the next thing because there’s two parts of the protest.”

On Monday, Freddie Gibbs also defended Jay-Z and took a shot at Kaepernick. “F*ck Colin Kaepernick,” Gibbs said. “All y’all n****s marched for Colin Kaepernick and he took a settlement and ain’t tell y’all what he got or nothing. He settled. Let it go. Y’all hating on Jay-Z for tryna own something in the NFL. Y’all n***s some muthaf*ckin’ crabs.”

In other Colin Kaepernick news, the former NFL quarterback appears on the latest cover of Paper Magazine.