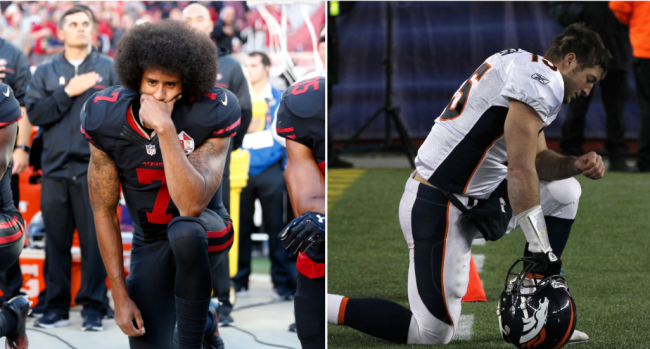 Tim Tebow is back on an NFL roster and his recent signing has been controversial on social media.

On Monday it was revealed that Jaguars head coach Urban Meyer was going to give Tim Tebow a shot at resurrecting his NFL career by signing the former QB as a tight end for the team.

If you stay ready, you don't have to get ready @TimTebow ⏰ pic.twitter.com/FTGAFFG2zg

The Jacksonville Jaguars are expected to sign Tebow, 33, to a one-year contract later this week or next week to play tight end, a position he never played in high school, college or his previous three-year NFL career, a source confirmed to ESPN. A deal has not been agreed upon at this time.

Once he signs, he will be reunited with Jaguars coach Urban Meyer, who coached Tebow at Florida and won a pair of national championships with the Gators.

Considering the fact that Tebow hasn’t played an NFL snap since 2012 people were angry at the fact that he was getting a shot at a comeback before Colin Kaepernick.

Tim Tebow hasn’t played football in 6 years and will be 34 heading into training camp and he just signed with the Jags. From here on out, I don't ever want to hear another word about how Colin Kaepernick isn't good enough for another shot in the NFL.

Kaepernick – Hasn't played since 2016. Gets nothing.

What's the difference? Can't seem to put my finger on it… pic.twitter.com/F9BF5CdqKX

There’s no way you can tell me that Tim Tebow deserves to be on a team as an unproven tight end who hasn’t played in 9 years more than Colin Kaepernick. There’s just no way that’s gonna make sense.

Remember, Colin Kaepernick isn’t in the NFL because…
– “he was a terrible QB”
– “he brings a media circus everywhere”
– “he hasn’t played in years”
– “kneeling is disrespectful” pic.twitter.com/12vwtUlTIz

This signing destroys the “Kaepernick has been out of the league too long” narrative. https://t.co/RzehBbtVd6 pic.twitter.com/oazE5fKIIg