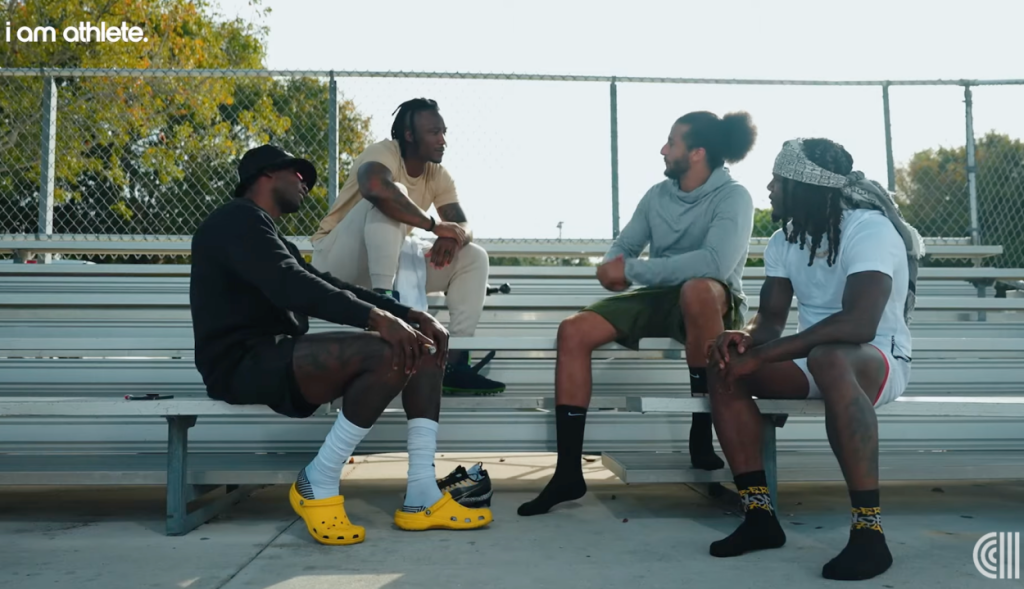 There has been a LOT of chatter recently about Colin Kaepernick getting another shot in the NFL. He recently showed off his throwing arm in a workout with Tyler Lockett and then went to work out with the Michigan Wolverines.

Let me just get this off my chest now: I don’t think Colin Kaepernick would cut it in the NFL today. And THE ONLY reason I feel this way is because of how long it’s been since he last took a snap in the NFL: 1,934 days or 5 years, 3 months, and 18 days. With that said, even though I don’t think he’d make it in today’s NFL I still think he deserves a workout as he MUST be a better option than some backups.

That’s how I feel and that’s probably more me projecting on him how I’ve aged over the past 5 years than how much Kap has aged in the past 5 years but Kaepernick wants a shot. He was a guest on the I Am Athlete podcast where they did some role-playing. Colin speaks to WR Brandon Marshall as if Marshall’s an NFL general manager and Kap pitches himself as deserving of another shot.

Colin Kaepernick Shares Message On Why He Deserves Another Chance

Colin Kaepernick said on the @IAMATHLETEpod that he still wants to get back in the NFL and is willing to take a backup job to get in.

How do you convince an owner or GM to bring you in and how do you get a fanbase to buy in? Here is Kaepernick's answer: pic.twitter.com/ReyVvR7yOb

Colin Kaepernick: “One, you can know by experience. My coach Jim Harbaugh spoke to it. My coach Chip Kelly spoke to it. And said that I made the locker room better. I came in, I prepared, I made the team better. That 2016 season, my last year, my teammates voted me the ‘Most Courageous and Inspirational Player.'”

Then they discuss what the GM would need to tell the fanbase. Smash the ‘play’ button to see the full clip! And now….

The last time Colin Kaepernick played in the NFL, Patrick Mahomes was still 3+ months away from getting drafted to the NFL and was still just a junior in college.

In the time since Kaepernick last played in the NFL, Tom Brady has won THREE SUPER BOWLS with two different teams and has retired and come back. The NFL moved on without Kaepernick. And it’s not as if he’d be old, Brady is 10 years older and Kap is only a year older than Matthew Stafford who just won a Super Bowl. But Kaepernick hasn’t been practicing at NFL speed for the past 5 years, 3 months, and 18 days, or 63 months and 18 days outside of the NFL.

Check out the full interview here:

You can watch all 52 minutes of the Colin Kapernick episode of I AM ATHLETE by smashing that ‘play’ button on the video above!

Do you gentlemen think Kaepernick could perform better than some NFL backups? And regardless of that answer, do you think he deserves a shot to at least prove his capabilities? Let us know in the Facebook comments or over on Twitter.