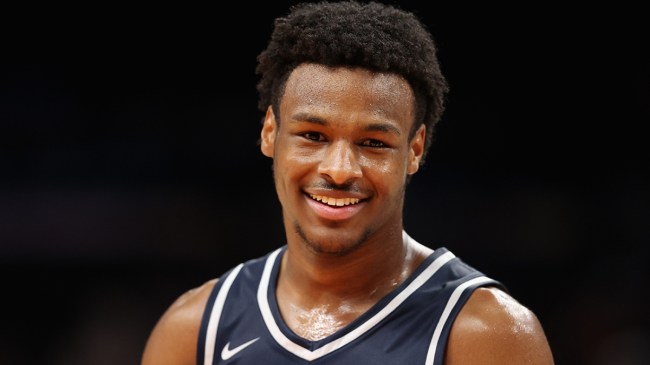 Bronny James has been gaining some hype lately as it sounds like he’s likely to play college basketball. However, it’s not determined which school he’ll play for yet.

Even so, it turns out that it’s difficult to recruit James. Now, an anonymous college coach explains why that’s the case.

According to Legion Hoops, a college basketball coach reveals the “hoops” one must jump through when recruiting Bronny James. Based on what he’s saying, it’s a legitimate process everyone must go through before they can speak to him.

“I tried to get involved, but you had to jump through a thousand hoops just to get to the mom… You’re not allowed to talk to the kid. You have to schedule a time on Tuesday or Thursday with the publicist just to talk to the mom.” pic.twitter.com/SE1E29g9ov

Hey, when you’re the son of one of the greatest basketball players ever, then this process should be expected, right? I mean this kid has been under the spotlight as soon as he reached high school. For that reason alone, college programs are having to work that much harder just to have a chance to talk with Bronny James.

It’s unclear what school he ends up playing for. Even so, it sounds like Bronny James has narrowed it down to a top three, per On3. “James has a top three of Ohio State, Oregon, and Southern California.” Although that’s true, there is a chance he doesn’t play college basketball altogether.

Recruiting should be ramping up as Bronny James is due to graduate in the summer of 2023. Look for him to make his official decision in the coming months, which will likely be heavily covered by sports media. Will he play college ball or will he take another route?