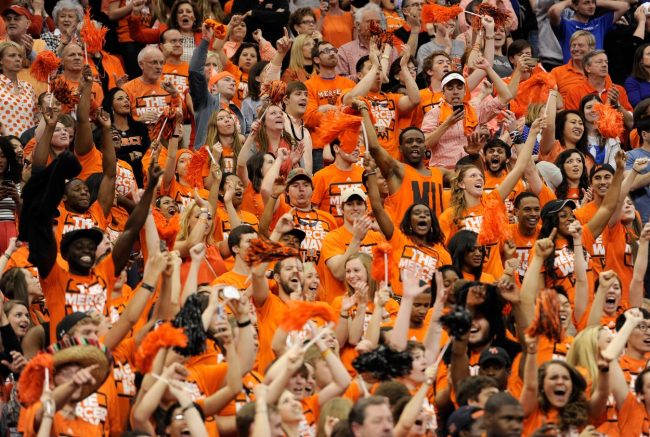 Mercer basketball’s 13th game of the season came down to the wire on Wednesday night. Amidst its battle against Troy, the referees made a questionable decision and one of its fans used an incredibly creative troll.

If you’ve ever been to a sporting event, you’ve probably seen/heard the following things:

However, I have never seen this.

During the closing moments of what became a four-point loss for the Bears, the game was within one possession with two minutes left. The official made a call on the floor and a Mercer fan disagreed.

To voice his displeasure, an overall-clad fan stood up from his seat. With a scowl on his face, he reached down to the floor, picked up a piece of paper and held it up toward the court.

The piece of paper was actually a Snellen Eye Chart, used to test vision.

The fan held it up as if to say “hey ref, you need your vision checked!” It was brilliant and, again, something I have never seen before. I legit laughed out loud.

I may be mistaken and someone is probably going to yell at me saying “my grandpa did this back in the 60s! UNORIGINAL!” or something like that. Fine, go ahead. If I haven’t seen it, as someone who is probably in the two percentile for college sports watched, then someone else hasn’t either.

I think this is incredibly brilliant and I don’t know how it is not more common. Heck, an entire student section should receive an eye chart prior to the game and hold it up after bad calls.

How has nobody thought of this before?!