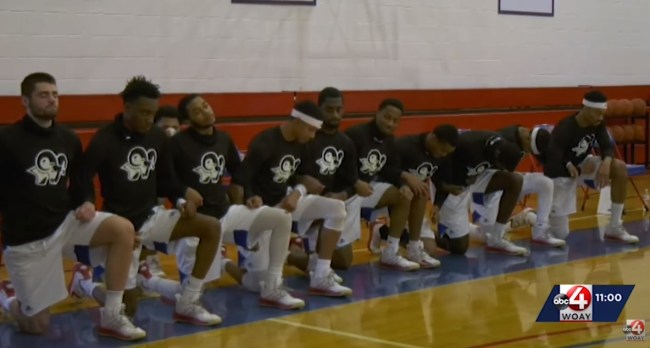 The Bluefield College men’s basketball team forfeited its NAIA game against Reinhardt on Thursday after school president David Olive suspended several players for kneeling during the national anthem in the last month.

On Thursday, Olive released a statement in which he said he suspended the players because he felt many of the team’s fans and donors would be offended by their actions.

Bluefield College in Virginia suspended their players for kneeling during a basketball game. They also forfeited the game. The President, David Olive, made this ruling based on how kneeling is perceived by his friends and alumni. Seriously, that was his statement. pic.twitter.com/aqcEtSSlpR

In a statement Thursday, Bluefield College president David Olive said that after players knelt before multiple games in January and February, even after he’d told them to stop, he decided to suspend all athletes involved, which resulted in a forfeit of the NAIA Appalachian Athletic Conference game against Reinhardt.

“The basis for my decision stemmed from my own awareness of how kneeling is perceived by some in our country, and I did not think a number of our alumni, friends, and donors of the College would view the act of kneeling during the anthem in a positive way,” Olive said.

According to ESPN’s report, Olive first learned the players were kneeling on Feb. 1 and told the team’s coach it wouldn’t be tolerated. Players ignored Olive’s orders and kept kneeling which led to the suspensions.

At the team’s next game, on Feb. 6, the team again remained in the locker room, but on Feb. 8, a local TV station showed video of players kneeling as part of a news story. The following day, Olive said the school released a statement, that included input from the players, responding to “erroneous and, at times, maligning information being shared about our student-athletes and college.”

That night, however, players again knelt for the anthem before Bluefield’s home game against Tennessee Wesleyan. After the game, Olive informed Morgan that there would be “consequences.”

Athletes at the school are now arguing that their First Amendment rights have been violated by the school’s decision to suspend players for kneeling during the anthem.

Olive said in his statement that players inquired about their First Amendment rights being violated, and he informed players that those rights did not apply to this situation.

Athletes from the men’s and women’s basketball team, football team and women’s soccer team all joined a video conference discussion this week, Gray said, arguing that their First Amendment rights had been violated and discussing ways to address the school’s policy.

“We are a private entity, not a governmental entity,” Olive said in his statement. “We have policies and guidelines throughout the student handbook and the academic catalog that limit certain rights you otherwise might have elsewhere, such as in your home or in a public venue. The most important to me as it pertains to this matter, however, is what I shared earlier. When someone puts on a uniform or is performing a function on behalf of Bluefield College, that person is now representing Bluefield College. Heightened expectations are now placed on that individual as to what s/he can and cannot do or say as a representative of the College.”

It’s currently unclear if players will continue to kneel during the anthem when they come back from suspension.